Well, yesterday, 15th March, was opening day. the weather was grey, misty and overcast. There was even a hint of rain. The wind came and went but was never more than a breeze. Several BFF members turned out and all but one caught fish. The best bag of the day was recorded by Terry Denley who had four rainbows for a bit over 7 lbs. Tony McCoy had three fish, also for around 7 lbs in total. They are pictured below: 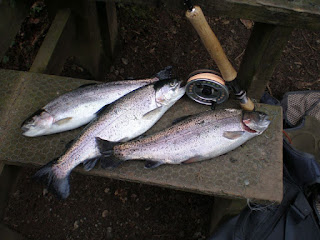 The new daily bag limit is five rainbows (all browns have to be returned). Numerous non members also fished, and more than one angler achieved their five.

In addition to fish caught there was plenty of frustrating action from fish taking short; being there and then gone, and fish hooked and played for a time and then lost. One member commented that all his fish were hooked in the front and top of the mouth, suggesting that the trout were following and 'nipping' the fly from behind, rather than turning on the fly and being hooked in the 'scissors'.

The general stamp of fish seemed good, appearing to be a little larger, on average, than in 2011. Most had full tails, very sprightly in the fight, and well worth catching. Buzzers, Loch Style Wets, Montanas, and numerous others patterns were effective on the day.

Perhaps the highlight of the day was the shore lunch of bacon sandwiches (with HP Sauce for those who wanted it) provided by Tony Vallack and his trusty camping stove.

Neil Reeves the SWLT chap who manages all the Dartmoor sites was around, meeting anglers. It was good to have an initial shoreside discussion about some of the ways in which the Burrator fishing can be improved and how we can help ensure that the lake is not misused by irresponsible people, often to the detriment of our fishing. He promised an official meeting with the club in the next few weeks. 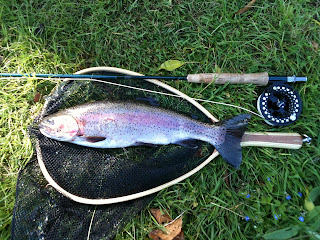 Posted by Peter Macconnell at 15:47