A Little More From The BFF Competition on 17 May

I met Peter at Longstone to buy my permit.  There was a good attendance from the BFF members and most if not all were fishing around Longstone.  I had not fished the west shore, where the boat is moored, for a long time and after a chat I headed over there parking at the boat slip.

The area recently cleared by Kit and his team did mean that I had no worries about my backcast catching a branch.  The gentle south or southeast breeze put a ripple on the surface although the sun was bright for most of the day. The water level was still high and only a foot or so below the sill on the dam.

I hooked five trout but landed just two. Both were stockies which went 1lb 4oz each.  Hardly any trout were rising but I did try a few casts with my favourite dry fly - an alder.  Nothing doing so it was a change to sub-surface nymphs.  The Daiwl Bach took the first fish soon after and I persevered with it for most of the day.  A slow retrieve on a floating line gave me at least two dozen tugs which I failed to convert to a fish.  I wondered if small brownies were responsible.  Several times the line was jerked back through the rings and I could not believe that they were'nt hooked!

I packed up around 7pm and only saw one other angler over on the west bank - not a BFF member - who had a rainbow first cast the other side of a clump of willow from where I was fishing.

Burrator Club Competition Saturday 17th May - A lovely day for it.

The weather on Saturday 17th May was more suitable for a day at the beach than one of fly fishing but, nevertheless, nine members turned out and for the most part caught some nice trout. John Jeffrey was the first member on the bank followed shortly by Peter Macconnell. They found the sun already bright, the sky blue, hardly a cloud in sight, and not a breath of wind. This was the state of affairs for the first three hours or so and, unsurprisingly, no fish were caught. Around late morning the wind got up from the south -east and a ripple appeared on the water, as can be seen by the above picture of John fishing on the Longstone Peninsula. This seemed to make the trout a little bolder and soon fish were showing on the top and rods were bending. Senior member Ken Hindley was the first to net a fish, followed by Terry Denley, Peter Macconnell and Mike Duckett.

Here are a few more pictures:


Posted by Peter Macconnell at 19:31 No comments:

At last the water level has dropped enough for us to begin to use the boats during the 2014 season.

Just to remind you that there are two boats available; a fifteen foot GRP rowing boat (usable with either oars or an electric outboard motor), and a Wheelie Boat for any one with significant disability that might make their use of the ordinary boat impractical. The rowing boat is available for Burrator Fly Fishing Association members, their guests, and members of a couple of other clubs. The Wheelie Boat is available for anyone who is disabled. Both boats are bookable only through Peter Macconnell, BFF Chairman and he can be contacted at 01752-560538, 07738-378227 or email psmacconnell@gmail.com

The daily cost of the boat is £15.00 for two anglers and this is in addition to the normal Burrator Permit  Prices.

For more details and to make a booking please contact Peter on the phone numbers or email address given above.

Posted by Peter Macconnell at 19:49 No comments:

I have been catching a few fish on muddlers recently and tying a few as well, so I thought I would post one of my latest attempts to copy a Rob Denson style muddler. 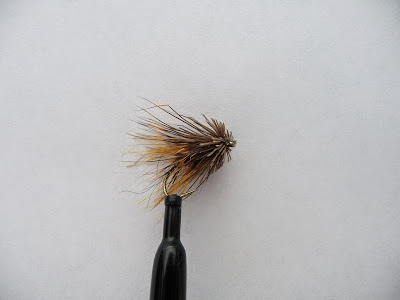 Also does anyone fancy going to the "Rise" film festival in Exeter. It's being screened at the Exeter Picture House on the 21st of May. Details can be found here. I live in Exeter and will definitely be going. The program looks good with a mixture of temperate and tropical freshwater and sea fishing. Maybe if a few people want to go we could meet up for a Pizza before going on to the Picture House.

Posted by Jon Perry’s Angling Blog at 11:34 No comments:

A life on the ocean waves?

We all may be very dedicated trout fishermen, but sometimes it is nice to have a bit of a change. Burrator members Tony Vallack, Mike Duckett and Peter Macconnell have, in recent years, been regulars aboard the Blue Lady, an old wooden fishing boat operating out of Beer in south-east Devon. Blue Lady is skippered by the redoubtable Cyril Newton and days out with him always bring a few fish and some good ‘craic’ (or whatever is the Devon equivalent of that Irish term). The trips are organised by Keith Steward a well known local angler, though not a fly fisher (yet). A few months ago Keith was looking for a couple of extra anglers to make up the six who are needed to charter the boat; he asked if any other Burrator members might be interested.  Mark Clark and Kelvin Nikulin volunteered for a trip out on Tuesday 29th April 2014.

The original plan for the day had been to fish for plaice in the morning and whiting in the afternoon, but all did not go as hoped for. Once the boat with us all aboard had slid down Beer’s lovely and very steep shingle beach, we set off in gray and overcast weather for the sandbanks where many plaice were reported to have been boated. However, it was not to be; another case of ‘you should have been here yesterday’ I guess. Only one small plaice was caught, by Mark, in over two hours of concerted fishing. We had all the baits; lovely big ragworms, squid, and mackerel, but plaice were not to be had.  We decided to move early to the ‘whiting grounds’ where numerous whiting were caught though most were quite small. Again Mark appeared to be the lucky one in catching fish of a better stamp. Peter had perhaps a dozen but none weighed more than half a pound and all went back alive. Others had similar luck except for Keith and Kelvin who boated several unwanted dogfish. During this period the weather was pretty mixed; full waterproof gear was needed and we got a fair soaking. A least the wind was slight and at times the sea quite calm.

In the afternoon both the weather and the fishing looked up. The sun came out, we could strip down to our shirtsleeves and, at the skippers suggestion, we moved again  to fish for pollack over an inshore reef. At last we saw some action and got decent bends in our rods. Kelvin and Cyril the skipper had the best fish though we all managed to hook up a time or two. Generally the pollack seemed to be in the range of three to seven pounds.

So in the end a good day out was had by all except Mike who, at the last minute, had to drop out because his wife Mary had been taken ill the day before. We missed you Mike and we hope Mary is feeling a bit better.

Posted by Peter Macconnell at 15:56 No comments: