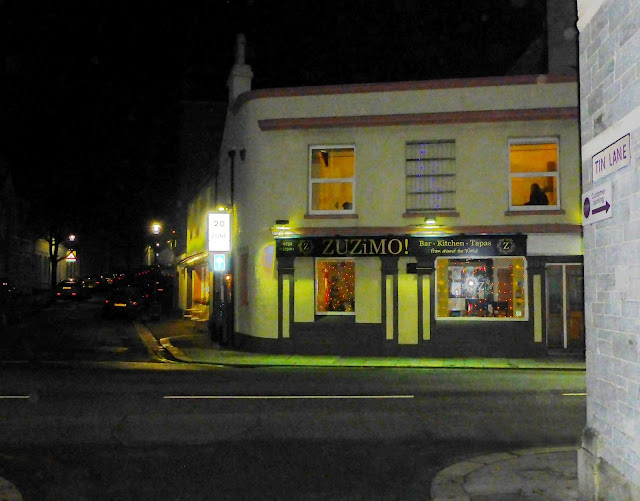 Twenty-two members and wives met at Zuzimo's Restaurant in Plymouth for the annual BFFA Christmas Supper on Monday 12th December.  The owner, Mo, greeted us as we arrived for a start time around 7.30pm.  We had pre-ordered our meals from the Christmas menu and the BFFA had donated two bottles of wine for each table of four guests.

The restaurant has a good atmosphere, good service and good food.  As usual the hospitality was second to none and the owner, Mo, even bought some of our raffle tickets and then won a prize in the draw.  Between us we covered the whole menu and there was nothing but praise for the quality of all the courses. 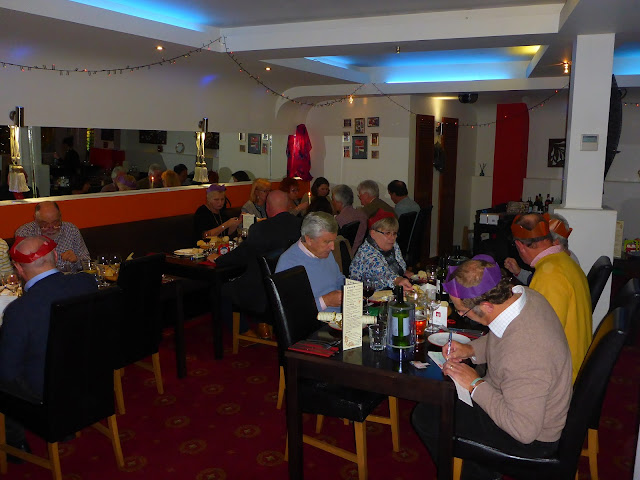 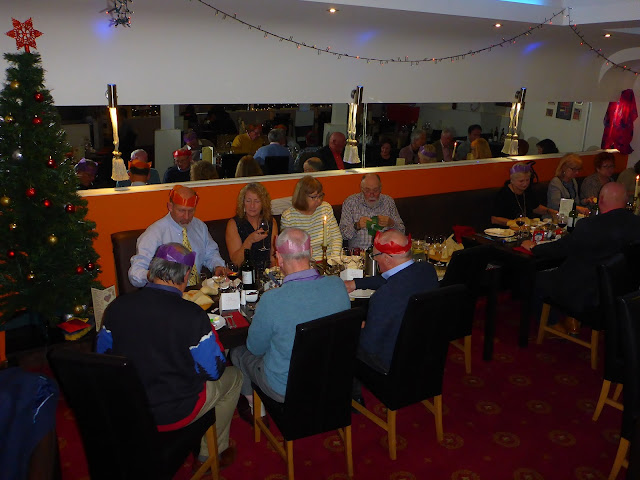 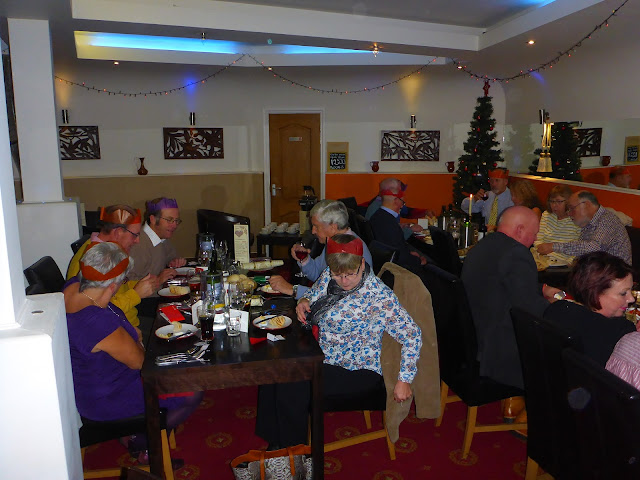 After the meal Peter presented Kelvin with a bottle of whisky for winning the Christmas fishing competition at Newhouse Fishery a couple of days earlier on the 10th December.  He had a rainbow of 3lb 8oz in a total bag of 7lb 4oz.   See the previous blog for Peter's report of the competition

Next it was the turn of our chairman, Kelvin, to present the three trophies won by members during the year.
'The Sunset Trophy' is for the biggest rainbow from Burrator and that was won by Ken Hindley with a trout of 5lb 8oz.  Ken could not be at the supper.   The new engraved glass 'Traveller's Trophy' for the biggest trout taken on an 'away day' at a fishery other than Burrator was won by Terry Denley with a rainbow of 3lb 12oz taken at Tavistock Fishery.  He  was also presented with an engraved glass paperweight to keep.  'The Three Fly Trophy' for a competition of the same name at Burrator was won by Tony Hooper with a rainbow of 1lb 10oz.  The trophy is a superb carved trout with a new one given each year by Tony Vallack.

Tony Vallack, in his splendid Christmas jumper, had been selling raffle tickets throughout the evening and the draw for prizes was eagerly awaited.  The table was groaning under the weight and members were invited to select a prize when their ticket was drawn.  Some members won several prizes and generously allowed a re-draw.


Another very successful and really enjoyable evening in good company!

As in previous years the BFFA held a pre-Christmas Competition on the Saturday before the Christmas Supper. This year we went to Newhouse Fishery at Gara Bridge, near Loddiswell, South Devon, on Saturday 10th December.

The weather on the day was not as bad as the forecasters had led us to expect but, nevertheless, it was intermittently wet and windy. Those overly pessimistic predictions by the weatherman had led one or two of our members to decided they preferred a warm fireside to a cold and windy valley, and who is to blame them?

In the end six brave, intrepid and hardy members wrapped up warm and dry, and with the occasional respite provided by the Newhouse Fishing Hut, persevered and were rewarded for their perseverance.


Kelvin, our esteemed Chairman was, I understand, the first there (by his own admission he doesn't get out enough). He was also the first to catch a fish which, it turned out, was the best fish of the day at almost three and a half pounds. Also making the effort were  Bob Eccles, Pat Power, Mike Duckett, Tony Vallack and Peter Macconnell.


It is quite common on these occasions for Tony Vallack to bring  his calor stove, frying pan, bread rolls and a pack of smoked back bacon. He did so today. So in addition to our own snacks and flasks were were able to have a bacon 'butty' to warm us up. Usually we also have tea from Tony Hooper's Kelly Kettle and cake from the fair hand of Linda James, but those delights remained untasted on this day. Still, a good time was had and a few fish were caught. As ever, the owners of Newhouse made us feel very welcome and were of help to Mike who, rather disabled these days, would have found getting to the waterside something of a strain without vehicular assistance.

I think the whole thing got us in the right frame of mind for the Christmas Supper.

Posted by Peter Macconnell at 16:33 No comments: