Once again the weather proved difficult for us in this month's club competition. While there was nothing like the torrents of rain we experienced in June the wind on Tuesday was very blustery and in something of the wrong direction in that there seemed very few places where we could fish with the wind behind us. Attempts to fish around Longstone Peninsula were only possible out on the end and tucked into the back bay on the north side. And that is where several anglers choose to fish.

Tony Vallack caught two fish for 2lb 12oz and that would seem to be the best bag from a club member, and he wins the bottle of wine. Here is a picture of him, looking pleased with himself, outside the Rock Inn at Yelverton  just before he bought drinks for us.

Additionally, just to remind you, there is no club competition in August, neither is there a Monday Club meeting. Details of the September events can be found in an earlier posting from March. What there is, during August, is the combined South West Lakes Trust/West Country Rivers Trust Open Fly Fishing evening at Roadford Lake. Their flyer says:

"South West Lakes Trust will be hosting a free fly fishing event at Roadford in conjunction with the Westcountry Rivers Trust on the evening of 15th August (4pm onwards), featuring fly-casting demonstations and clinics, fly tying demonstrations etc. Refreshments will be available."

This sounds like it could be a fun event, especially if the weather is nice (it must get better soon!). If anyone who fancies going lets me know and we can arrange to meet up there or perhaps travel together.
Posted by Peter Macconnell at 18:01 No comments:

The following report has been issued by South West Lakes Trust:

South West Lakes Trust Trout Fisheries (June 2012)
General:
June continued with mixed and unsettled weather, and temperatures below the seasonal average. Hatches and surface activity increased as the month progressed, providing good dry fly fishing at most of the South West Lakes Trust waters. The high rainfall throughout the month has meant that water levels are generally still at the top water mark.

Fishing:
Kennick – The fishing remained consistently good throughout June, with rods averaging 3.3 fish per angler. An abundance of insects on the surface (Hawthorns, Beetles, Heather Flies, and Buzzers) meant that fish were eager to come up for food, and many were taken on dry patterns (Hawthorn, Foam Beetles, Hoppers, and Coch-y-bondhu patterns in particular), or nymph patterns (such as Diawl Bachs, Buzzers, Pheasant Tails, and Damsel Nymphs) fished on a floating line. Some excellent fish were caught in the month, including a 7lb 14oz rainbow (the fishery’s best so far this season) caught by Alex Brimblecombe (from Bridford), using a Hawthorn Fly fished from Laployd Bank on the evening of 24th June. A 7lb 4oz rainbow was caught by Andy Lobb (from Newton Abbot), using a Montana Nymph fished from the bank, and ten other rainbows over 5lb were caught during the month. Duncan Keir (from Belstone) caught and returned a cracking 3lb 8oz brown trout (as part of a bag of ten fish) when fishing from a boat using his ‘Kennick Killer’ pattern.

Burrator – the fishing at Burrator has continued to produce some excellent sport, with anglers averaging over three fish per rod. Fish have been feeding eagerly on hawthorns, and fishing a selection of dark dry patterns (such as Hawthorns, Bibio, Black Gnat, Black Klinkhammers) has worked well. Diawl Bachs and Damsel Nymphs have been the most successful sub-surface patterns. The fish have been well distributed around the fishery, so it has been more a question of finding a sheltered spot to fish on windier days when deciding on the best location. The best fish caught in June (and so far this season at Burrator) was a beautiful 6lb 10oz rainbow caught by Al Lawson (from Plymouth), using a Black Gnat while fishing from the shore at Longstone Point.

Siblyback - continued to provide good sport, with anglers averaging 3.4 fish per rod during the month, with good surface sport on calmer days, when fish could be caught on dark Hoppers, Beetles, Sedges, and Black and Peacock spiders fished in the surface film. Damsel Nymphs, Diawl Bachs, Montanas, and Buzzers all fished consistently well sub-surface, while pulled Orange Blobs, Tadpoles, and Vivas worked well on deeper fish. Most areas fished well, with Stocky Bay, Two Meadows, and the deeper water by the dam being particularly productive, with the area around the Marshes producing fish for boat anglers. The best fish of the month was a 3lb 10ozz rainbow caught by C.Hall (from Pensilva).

Wimbleball – anglers continued to enjoy great sport at Wimbleball, with rods averaging 4.7 fish per angler, with fish feeding well, and anglers catching from both boats and bank. Ruggs and Bessoms fished well for bank anglers, while boat anglers enjoyed success in Cow Moor. The Upton Arm, by the Dam, and Ruggs, as well as drifting from Bessoms to the Pontoons. Black Gnats, Hoppers, and Beetles all caught surface feeding fish well, with Damsel and Montana Nymphs, as well as pulled blobs and lures (particularly from boats) catching the deeper fish.

The best fish of the month were 4lb rainbows caught by Mr. Muckle (from Stafford) and J.Melhuish (from Tiverton). The fish-off for the 2011 Boat Pairs competition was at last held on 24th June, and was won by The Siblyback Raiders (Tony Chipman and Roger Truscott), catching 11 fish weighing 19lb 14oz. This year’s competition will be held on the weekend of 1 & 2 September.

Roadford - continued to produce some quality, if slightly more challenging fishing, with both boat and bank anglers catch resident Brown trout in excellent condition. Coch-y-bondus, Black and Peacock Spiders and Hoppers have all caught surface-feeding fish, with Black Tadpoles, Crunchers, and Pheasant Tails catching deeper fish. The best locations are on the East Bank, with many fish tight into the margins. The best fish of the month was a 3lb 1oz grown-on brown trout caught by Philip Smith using a Black and Peacock Spider, fishing from a boat.
South West Lakes Trust will be hosting a free fly fishing event at Roadford in conjunction with the Westcountry Rivers Trust on the evening of 15 August (4pm onwards), featuring fly-casting demonstrations and clinics, fly tying demonstrations etc. Refreshments will be available.

Stithians - Dry fly fishing has again produced the best sport at Stithians, with Hawthorns, Black Hoppers, and Beetles all catching well (particularly when fished near the bankside willows, where terrestrials are blown onto the water). Yellowort Bay and the deeper water by the dam also fished well, with Diawl Bachs, Pheasant Tails, Damsels, Montanas, and Buzzers catching fish, and pulled orange lure patterns taking deeper fish. The best fish of the month was a 4lb 8oz rainbow caught by R. Davies (from St. Day).

Fernworthy – The Brown trout at Fernworthy have continued to feed eagerly, with predominantly dark patterns still catching fish – these included Black Buzzers, Black Pennells, Bibios, Montanas, small Tadpoles, and Claret Bumble patterns, while fish rose to Black Hoppers, Beetles, and Hawthorns. Late afternoons have fished particularly well, with a number of fish feeding off the bank below the permit hut and near the dam. July Prospects are good for surface fish to soon start coming up to Coch-y-bondhu beetles, which can be prolific at Fernworthy. Anglers are advised to come armed with a good insect repellent, as the midges will be much in evidence (particularly in the evenings).

At our our club meeting on Monday 9th July it was decided that the date and venue for our July competition is to be changed.

We were due to visit Fernworthy on Wednesday 18th July but it became clear that Tuesday would be more convenient for most members and, given the fact that it is fishing really well, it was decided we would stay 'at home' at Burrator.

So, officially, the July competition is Tuesday 17th July at Burrator. Only fish caught after 12 noon will count.

See you there.
Posted by Peter Macconnell at 09:44 No comments:

Burrator back 'On Form'

Since our somewhat dismal showing at the last club evening (see the previous post), Burrator has quickly got back to fishing well.

On the Friday 22nd June, only two days after our 'washout', Ken Hindley fished it and had his limit on dry fly (a small black gnat) in the bay on the north side of the peninsula. This has been followed by reports of lots more fish coming to anglers' nets, including two six pounders (best 6lbs 10oz).

I fished today and in a short session between 12 noon until 5 o'clock caught six fish, of which I kept only two, releasing the other four. I also lost two or three others including one that I played for what seemed like five minutes at least, and which eventually bent out the hook on my black hopper fly, having taken out the best part of my 30 yard fly line. All the others were typical Burrator rainbows of about a pound and a half, but full tailed and good fighters nevertheless.

I chanced to meet the 'Two Alans'; Alan Behan and Alan Lawson who are regular fishers at Burrator and both have taken on the role of volunteer bailiff. A nicer couple of chaps one couldn't wish to meet and, it turned out, they are the two anglers who caught six pounders in recent weeks. If you are fishing Burrator this season you are bound to come across them. Please cooperate with them if they ask to see your permit. This initiative is, in my view, very welcome and,with luck, might really help to reduce 'poaching' on the water.

As to flies, most of my fish today were taken on a small black hopper (size 14) that, in the end, was so busted up from being attacked by the trout that it lost its 'legs'. I also had a couple of fish on a fly that has no official name, but I call it the 'Orange Hill Special'. It was tied by Tom Hill who runs Fishing for Heroes down here in Devon (see website link).

The other thing about Burrator at the moment is how high the water level is. I can never remember it being so full at this time of the year. Here is a picture of some more of the stuff going in. 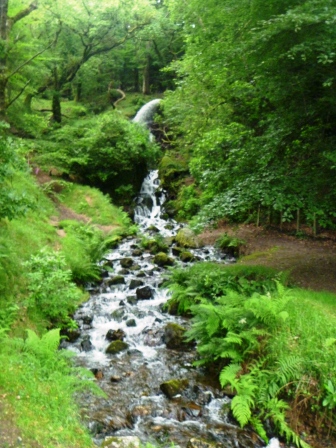 Posted by Peter Macconnell at 21:53 No comments: