BFFA Three Fly Competition at Burrator on Wednesday 16th May 2018

Ten members met at Longstone for this annual competition.  There are three patterns of fly available to each competitor all tied by BFFA members, hence the name 'Three Fly Competition'!  This year the flies were tied by Pat Power - a dry fly, Bob Eccles - a Damsel Nymph and Tony Hooper - a green & black Kennick killer.  By the end of the day trout had been caught on all three patterns.

There had been a change to the start & finish times agreed at an earlier meeting.  This year the start time was 1pm with the weigh-in at 8pm.  It turned out to be a bit of a grey day, overcast with light rain some of the time.  The air temperature was 15C and the water temp was also 15C. 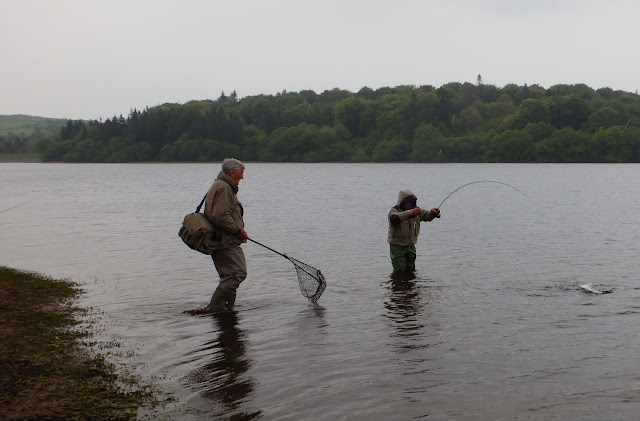 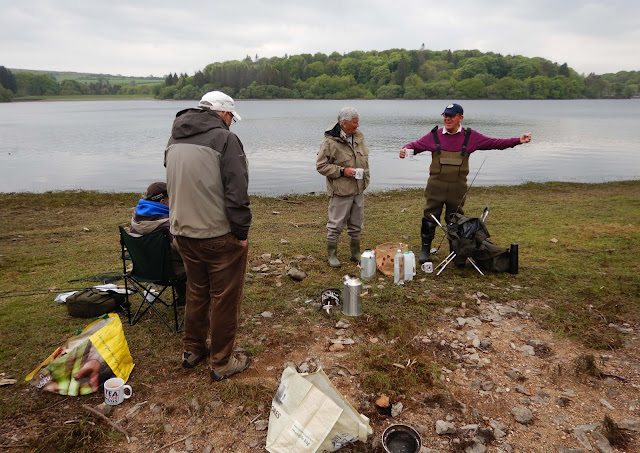 Yet another good turn-out of eleven members for the competition at Tavistock Trout Fishery on 26th April 2018.  Apart from a couple of showers, the day was sunshine and cloud.  Although cool in the morning, it did warm up after lunch.  I took the water temperature at 10C while the air was around 12C.

The competition started at 10am and even before I had bought my ticket Jay Nicholls had a rainbow of over 3lb from Kingfisher and Bob Eccles had netted two others from the Big Osprey.

As it was very busy on the 'top' lakes - Kingfisher, Osprey & Big Osprey, I decided to have a few casts on Heron Lake.  With no anglers there at all I had plenty of choice of bank!  I was using a black Kennick Killer and had several plucks & pulls before landing one of 2lb 5oz.  Bob Prout had one from Little Heron.

The owner of Tavistock Fishery, Abigail,  generously gave a prize of a landing net for the winner and, as Jay's trout was within 3/8oz of Pete's winning trout, she gave him a baseball cap, too.  Much appreciated by us all.


As with all our away-day competitions it is the biggest fish that wins.

Here are the results:-
The winner was Pete Phillips with a rainbow of 3lb 4 3/8oz.  He had another of 2lb 12oz.
A very close second with a bag of five rainbows was Jay Nicholls - the biggest at 3lb 4oz, 2 others at 3lb and another 2 at 2lb 12oz.
Bob Prout had two rainbows best 3lb 1/2oz
Bob Eccles took 4 trout between 2lb 8oz and 3lb
Pat Power had two at 2lb 10oz & 2lb 8oz
Don Brown one rainbow of 2lb 6oz
Tony Hooper one rainbow of 2lb 5oz
David Lye, Kelvin Nikulin, Anthony Waldren and Terry Denley all put in nil returns.

Eleven members fished the competition starting at 10am with a weigh-in at 3pm.  There was a south to southeast breeze blowing all day.  Honorary bailiff and BFFA member Al Lawson fished the south side of Longstone and later the end of the peninsular.  He won the competition with a five fish bag weight of just over 8lb.  His best fish was a rainbow of 2lb 12oz, the other four were all blues.  All taken, I think, on a damsel nymph. It was very nice to see Burrator Fly Fishers only family members there.  The Hampton team fished mostly at the end of the Longstone Peninsula.  Sadly, none of them reported any fish landed.  There were several nil returns from other members.

I have attended two of the re-stockings this year.  The first one was at Longstone on 16th March 2018 where 270 trout were released into Burrator by Paul Evenden of Milemead Fisheries at Mill Hill near Tavistock.  Two other BFFA members came along for the 9am stocking, Kevin Sellar & Pat Power.

The trout were a mix of rainbows & blues and either 1lb 4oz or 1lb 8oz although a few were nearer 2lb.


On Monday 9th April Paul released about 250 trout at the slipway where the two angling boats are moored.  There was a mix of rainbows and blue trout.  This was an afternoon stocking and was attended by Mike, a volunteer with SWLT, BFFA members Stuart McCullough and me.  My wife Sue also came along.

I had been told that some big trout of around 12lb were to be released at the same time and below are some photographs as two biggies were put into the reservoir.  Paul said that similar sized trout had already been put into Stithians, a reservoir of 274 acres near Redruth.  The chairman, Paul Wallace, of CAST the fly fishing club based there had landed and returned one of over 11lb during a a recent competition at Stithians. 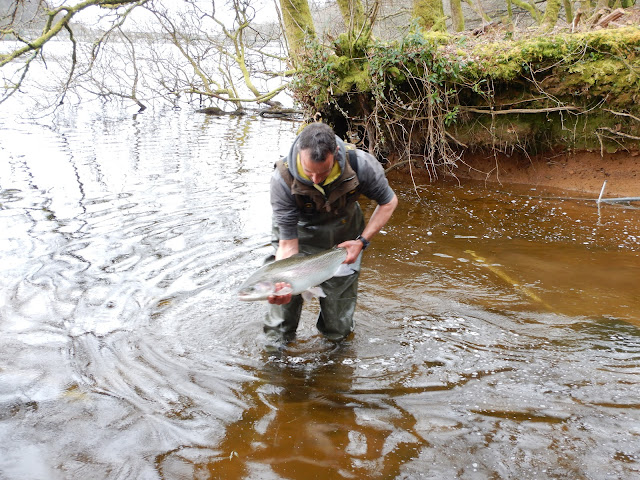 A Day in the Boat at Hawkridge Reservoir - 5th April 2018

A last minute check of the weather forecast - wet & windy - meant a change of day to fish at Hawkridge.  Unfortunately that also meant that Pat & Bob couldn't make our meet at the reservoir.  The day turned out to be a 'window in the weather' - dry all day with sun before lunch and increasing high level thin cloud in the afternoon.  I took the water temperature at 8C while the air was around 10-11C with a multi directional breeze eddying around the valley. There had been a lot of rain recently and the water was running over the dam.

I think the cool water slowed things down and despite lots of anglers fishing both on the bank and from boats we did not see much action in the morning.  My brother, Chris, & I had booked a boat and we used my electric outboard to fish various spots on the 32 acre lake which is managed by Wessex Water.  The permits were £20 each (concession) and a boat permit £15. Parking near the boats is quite limited and the main car park is near the reservoir entrance off the road (Lawyers Hill).  We dropped all the gear, motor & batteries at the permit/Ranger's hut just above the boat pontoon and while Chris parked the car and walked the 400yards back to the pontoon I got the boat ready.

We fished mostly towards the top end away from the dam.  Even so, the water is still quite deep with about 70' near the dam and still perhaps 30-40' off the pontoon.  Chris used a sinking line - either fast sinker or an intermediate line - and stuck with his favourite fly for Hawkridge, a white & lime green Cat's Whisker.  I had my two trout - both Spartics - on a floating line with one of my own tied black & green Kennick Killers (very like the Nomad) weighted with a 3.8mm gold bead.  The biggest was about 4.5lb the other around 3lb. The Spartics were a first for me.  Chris had four trout - three rainbows and a blue.  Again the blue was a first for Chris.

Although it is about 85 miles from Plymouth most of the drive is on dual carriageway and motorway with only the last few miles on backroads.  It is a very popular fishery with good bank fishing and boats usually available - book with the ranger in advance.

Another well attended competition with eleven members meeting at Blakewell Fishery near Barnstaple in North Devon.  We were due to start at 10am but a traffic accident near Exeter saw several of us held up for an hour in a long queue from Haldon Hill.  There was also a long queue through a mobile traffic control on the North Devon link road.  Valuable competition time was being lost!

Pete Phillips, Tony Vallack & Mike Duckett had left Plymouth earlier than most of us and missed the hold-ups so were able to begin fishing at the competition start time of 10am.  By the time the rest of us cast a line around 1045am they had already taken several rainbows.  I had not fished at Blakewell previously but the south bank was unoccupied so I headed that way. The fishery is a single five acre lake stocked with rainbows and brown trout.  Although we landed plenty of fish during the competition they were all rainbows and I was a little disappointed not to see any brownies.

I put on one of my own tied Black & Green Kennick Killers (very similar to the Nomad lure) and little later I hooked and lost a trout followed after a short while by a repeat when another trout 'came off'.  Examination of the fly revealed that the point had broken off at the barb - it pays to check before starting to fish!  Trout were being landed all across the lake and there were a few buzzers hatching.  It was another hour before my Kennick Killer - this time with a proper point - was snatched fairly close in by a powerful trout that surged after the fly creating a big bow wave.  Pete and Kevin were fishing nearby and after a lot of to & fro-ing with my Fulling Mill rod well bent, Pete offered to net what looked to be a good fish.

A few minutes later Pete deftly wielded his net and the trout was on the bank.  He weighed it for me at 8lb 6oz - a personal best trout for me on rod & line so my thanks to Pete for expertly netting it! As so often happens at the last the 6lb line parted at the fly when the trout was in the net.  On reflection the size of the trout that could hooked in the lake - rainbows up to 15lb & browns up to 12lb or so - warranted a heavier leader, perhaps 8lb or even 10lb fluoro.

Two brothers, Richard & John Nickell, own the fishery and at lunchtime Richard made bacon baps for everyone as we took a break for a chat in the café.  Tea & coffee was also served.  All very reasonably priced, I thought.  There is also a well stocked tackle shop on site.


The results (to be updated later) are:

A great day out for the BFFA members at a well run, well stocked fishery.

Although we enjoyed a sunny day at Innis Fishery, near St Austell there was a cold SE wind blowing along Carbis Lake where we all fished.  The air temperature was 7C and the water was the same at 7C.  Eleven club members took part in the competition with varying degrees of success!

David had three trout including a thin one which had probably over-wintered in the lake. I had one of 3lb 3oz which proved to be the biggest fish of the day plus another of just over 2lb.  Bill and Bob also had two fish each while TonyV and Kelvin had one each.  Five of us put in a nil return.

The result means that John Bright is still in the lead for the Travellers Trophy with his 3lb 4.5oz trout from Tavistock in January.  Although Carbis Lake is stocked with Brown Trout, Blue Trout and Rainbows, all the trout landed were Rainbows.