Six members turned out for our first evening visit to Burrator this season. They were Ken Hindley, Mike Duckett, Terry Denley, Frank Dunlop, Tony McCoy, and Peter Macconnell.
This was Ken's first fishing trip for quite some time so it was good to see him get right back into the swing of things with a couple of nice rainbows taken on a scruffy looking little black fly, the name of which he couldn't remember. 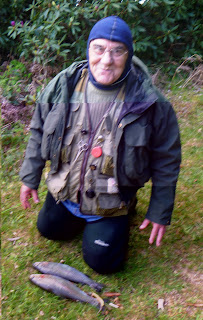 Most members saw a bit of action and, in the end, the results were:

So overall it wasn't bad and a bit of sport was had because all the anglers had numerous other takes and hooked and lost fish. As dusk approached there was a flat clam and some surface movement from fish that proved particularly hard to catch.

Some more pictures (Double click on any picture to see them enlarged as a slide show): 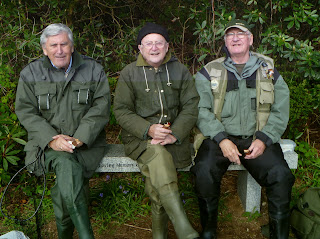 'It was this big...'
Tony McCoy describes the one that got away 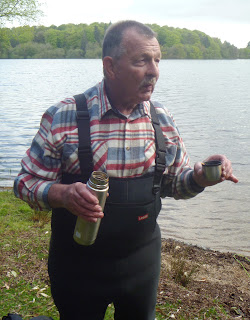 In a tangle...? Mike Duckett sorts out his 'knitting' 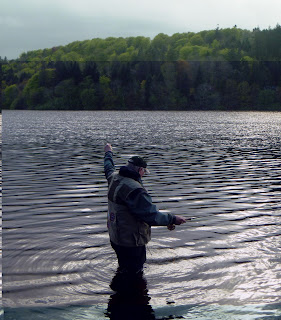 This year our 'Three Fly Competition' took place as planned on Saturday 14th April at Bake Lakes. Unfortunately our planning was not very good and neither was our luck.

In years past Terry Buttle tied the flies for members to use, but this year, Terry having left the club, our other 'expert' fly dresser, Tony McCoy, offered to do the honours. Unfortunately he forgot to tell us that he would be in Gran Canaria soaking up the sun and the wine during April. So in the end we fished with bought flies. After lengthy discussion Peter and Mike decided that the flies for the day would be a lure (Viva), a nymph (Pearl Daiwl Bach), and a traditional wet (Goat's Toe). these were duly handed out to the half dozen or so members who turned out, and with the exception of Tony Vallack we all managed to blank! to be fair, it was a difficult day weather wise and very little was being caught by other anglers.

So congratulations to Tony for his fish of just over three pounds. Also welcome to our newest member Peter Phillips who came along for the first time. 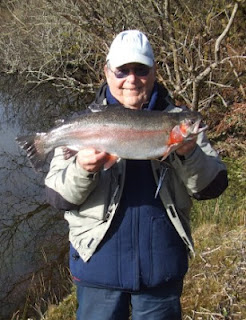 Our next event is our first Burrator evening on Wednesday 16th May.
Posted by Peter Macconnell at 18:05 No comments: