A First Boat Trip at Burrator

I had not been out in the boat at Burrator since joining the BFF so Peter kindly agreed to initiate me into the dark art of Burrator Boating!  The day started off quite mild and with little wind although the forecast was giving a strengthening easterly.  Peter had brought his electric outboard and batteries with him so no need for rowing.

We first tried the area between Longstone and the Sheepstor Dam.   I had a cast towards a solitary surface swirl and was surprised to be taken by a Blue Trout on a black & green Kennick Killer. We had seen no other trout activity.

The air temperature dropped as the cloud cover increased.  The wind picked up from the Northeast and it was on with an extra fleece followed by a windproof coat.  We even had a few drops of rain during the morning.  We saw an angler fishing towards the point at Longstone net three trout in a   short period.  Our drifts a little way out from the shoreline produced nothing at all.  The water became quite choppy farther out.  We considered using the drogue but stayed in the calmer waters.

In the afternoon the wind dropped a bit and it became warmer although there was very little fly life or trout activity.  The odd buzzer appeared.  We continued along the Sheepstor Dam/Longstone shoreline and I had one more rainbow.  Peter tried various flies and methods but apart from a couple of tugs at his nymphs  –  Invicta & Pheasant Tail – he didn’t net anything.

Changed competition dates and venues for 2015

Following on the discussion at the last two club meetings in February and March we have agreed some changes of dates and venues. Here is a revised list that hopefully reflects those discussions. The changes are to increase the numbers of days actually at Burrator, to anticipate the probable closing of Bake Lakes as a trout fishery, and to increase the number of Saturdays within the total for the year thus accommodating more easily those members who are working during the week.


Over the last couple of weeks the Burrator water level has fallen sufficiently for us to now begin using the boat.

The arrangements are more or less the same as last year in that boat permits will be issued by the club (mainly through me) and will be, with minor exceptions, for club members and their guests only. One change is that for those members who are also season permit holders the daily fee for the boat will be £10.00 and not the full £15.00 which must still be paid by day permit users. Payment should be made to me and not directly to SWLT. For those who don't have a season permit I have some day fishing permits (including concessions and evening tickets) at 10% discount to BFF members

I have a two sets of oars, two anchors and four flotation vests from SWLT. I know that several members have their own equipment but for those who haven't you can make arrangements when you book about collecting these from me.

For any member new to using the boat I will come and meet you and show you the routine for launching and recovering the boat and how to lock/unlock the boat and the gate to the slipway.

Posted by Peter Macconnell at 13:39 No comments:

The Easter bank holiday enjoyed a spell of warm, sunny and settled weather.  I visited Burrator on the Tuesday and parked at Longstone.  David Lye had just arrived and was setting up to fish by the ruined manor house.  I walked around to the shore between there and the Sheepstor Dam - an area I had not previously fished.  The water level had dropped below the level of the sill exposing more of the lakebed which makes the backcast a lot easier!

There was  a gentle breeze from the east or north east.  Later in the morning the few clouds burned off and it became very sunny for the rest of the day.  There were lots of trout dimpling and occasionally making a big splash on the calm surface.  A few buzzers drifted past me but I felt that most of the trout activity was sub-surface.  I tried a black marabou tailed Nomad with an orange fritz body weighted with a small gold bead on a floating line and a ten foot leader.  Almost instant success as I landed my first Blue Trout from Burrator.  It was around 2lb.  I had lots of tugs at the fly but I suspected they were just nibbling at the longish marabou tail.  I had two more Rainbows of under 2lb and later tried a Montana but still had lots of plucks and tugs without hooking any more along that shore.  I walked back to Longstone where David was fishing.  We were joined by Terry Denley, who was not fishing, and a little later by Peter Macconnell.

Kit Hancock arrived to supervise a restocking by Paul Evenden of Milemead Fisheries. These restockings are based on anglers catch returns so it is vital that catch returns are submitted at the end of the day.  I asked Paul about a visit to his fishery near Tavistock by members of the BFF to see the production of trout.  He said he and his brother, Andrew, would be pleased to show us around but due to a re-organisation of the trout farm at Milemead he would prefer us to visit early in the New Year and before the season opens in March 2016.  We agreed that I will contact him nearer the time to make arrangements.

David had to leave at lunchtime.  Peter & I continued fishing until later in the afternoon when Peter left to check on the boats.  We should be able to start using them next week.  Both of us had our bag limits of five fish. 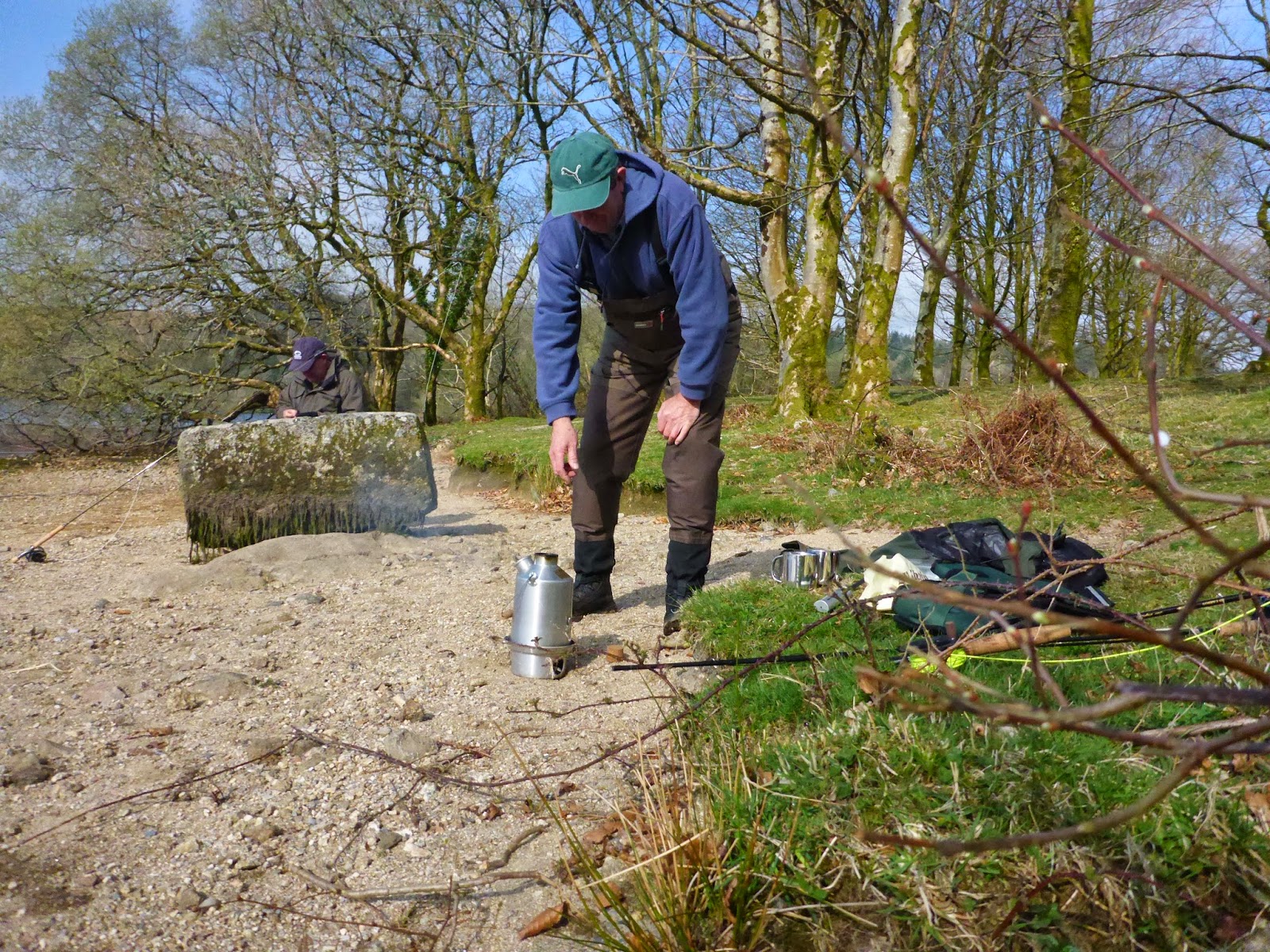