The competition at Burrator on Saturday 15th June was cancelled because of the poor weather forecast. I had already bought my day ticket online so fished anyway.

At Longstone Point I met a member of BFF who had two rainbows and as the wind, a force 5-7,  was straight into the bay below the house I went around to the right.    I had one trout, my first ever Burrator rainbow, on a black & orange Montana. 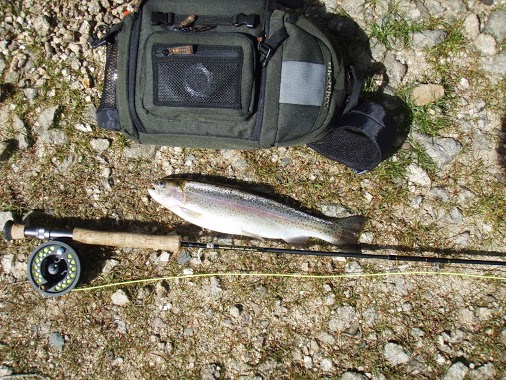 Later I went back to have a look at the bay on the windward side meeting Pat Power on the way.  Pat had taken five rainbows on a black buzzer on the north side of the point.  The wind was certainly blasting into the corner and I used a heavier sinking line along with casting left-handed to get out into the waves. 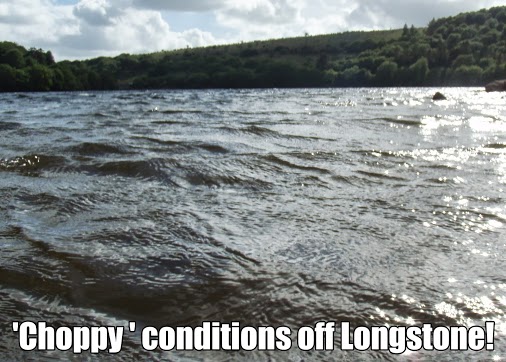 I had two rainbows followed by several pulls and tugs before I realised that the hook had broken at the bend.  Probably snagged on the rocky shore behind me.  I finished around 7pm with five rainbows - the best two at 1lb 12oz. - Tony Hooper
Posted by Tony Hooper at 19:18 1 comment:

I have not fished Burrator for about 30 years since I lived at Walkhampton.  It was very breezy from the North West which gave a little shelter along some of the western shore.  I chatted with Pat Power before I started to fish and then moved along the lake where I had one brownie on a buzzer.  Although windy, the sun was out and I was reminded that Burrator is among the most scenic of Dartmoor's man-made lakes. I also recalled that the record brown trout many years ago was around 14lb and my brother, Chris, landed one of 4.5lb. 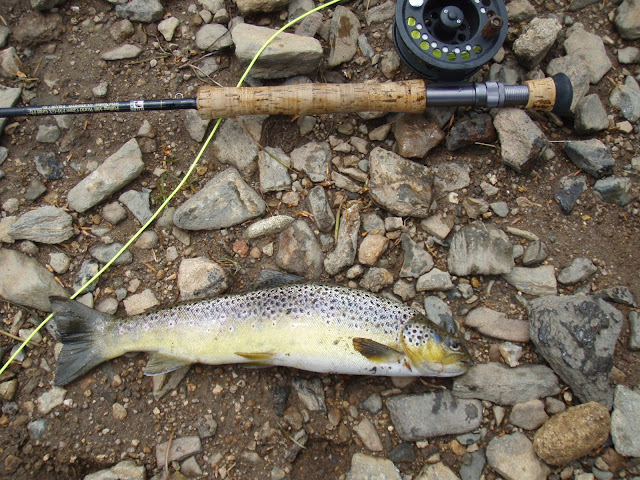 Later, I drove around to Longstone where in the corner below the old manor house it was positively balmy.  I had a few pulls on buzzers but landed no more trout - a bit out of touch!  Two other anglers nearby had five rainbows between them.  They went off to try the Sheepstor dam but were soon back saying they could hardly stand up there let alone cast a fly - Tony Hooper

As a complete novice to Fly Fishing I thought I would share some thoughts about rods tested. Not having the best technique I found the Hardy Demon very 'user friendly'  and able to cast a Hopper on floating line  at distance amongst the fish - Mark Sinclair 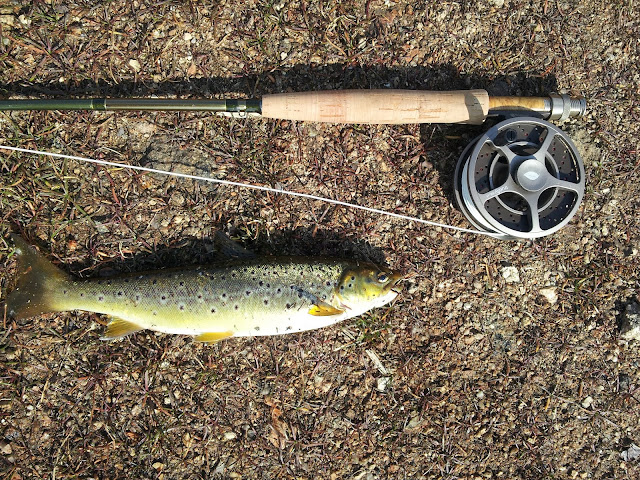 First Burrator Brown for me taken on a red Diawl Bach in very windy conditions - Mark Sinclair
Posted by Unknown at 20:19 No comments:

﻿
On Friday 31st May Pat Power and Peter Macconnell took the boat out at Burrator. What with the high winds and all it was one of the few times in the last couple of weeks that it has been possible to get out in any degree of comfort. However, Friday was a pleasant sunny day with just enough cloud cover and just enough ripple on the water to offer the promise of decent fishing, and that's how it started out.

Both Pat and Peter had a couple of rainbows quite quickly, but then things started to become more difficult and, having initially been able to take fish high in the water, fishing became very dour indeed once the sun brightened and the morning turned into afternoon. Pat worked out what was going on, switching to fish a Red Cormorant fly, a pattern of his own design and tying, on a medium sinking line, he reconnected with the fish. To say the fish were jumping on his fly would be to exaggerate only slightly, but he certainly had found the killing method. We were in comparatively shallow water, an estimated 5-15 feet, and the fish were taking well below the surface. In the end Pat got just reward for his effort in the form of a 4lb 1oz rainbow as part of a limit bag and several other fish released unharmed.

Posted by Peter Macconnell at 16:27 No comments:

﻿
Strictly speaking, this blog is supposed to be about fly fishing at Burrator. However, this week, Thursday 30th May to be precise, Jon & Peter decided to have a bit of a change and to take a boat out at Roadford. For any of you who don't know it, compared to Burrator, Roadford, near Broadwoodwidger, off the A30 part way between Okehampton and Bodmin, is a massive water; more than 700 acres in fact. This being the case SWLT have taken the very sensible step of providing boats with petrol outboard engines, and it was one of these we rented for the day.

The outboard engine (a very nice and new looking 4HP Mariner Four Stroke) allowed us to search the lake with some degree of efficiency and safety. When, at one stage, it got a bit windy and quite choppy were able to make our way to a safe sheltered area with ease; one pull of the starter rope, the engine fired immediately to life, and off we went. Basically we worked our way across to the eastern side of the lake and found a couple of bays that we could fish by drifting diagonally into the bank, motoring out,  and then drifting in again, so that we were able to proceed in a zig-zag fashion, fishing over the front 'loch style' as they say.


﻿
In the end we had fifteen brown trout, with the best going about two and a half pounds. Several were over a pound and there were some smaller ones of half a pound or less. The thing is though, these are not stocked fish in the normal sense in which we think about trout stocking of reservoirs. There is a naturally occuring head of brownies in the water and these are supplemented, from time to time, with fingerlings from the hatchery. So there are no takeable sized fish introduced. In our brief visit we noticed that this seemed to produce a much more natural stock pattern in terms of sizes. There is not that artificially large proportion of bigger fish that ones sees at rainbow trout fisheries. On the day we chose to release all the fish we caught, but it is permissable for each angler to take up to four fish, over ten inches.


The fly patterns that seemed to work were sedge imitations; Sedgehog, Green Peter, etc., fished more or less at the surface, on a pulled retrieve.
Posted by Peter Macconnell at 15:43 No comments: