There was a great turnout of members for the first competition of 2018. Thirteen of us met for the start at 10am and after buying tickets we spread out onto all five lakes. Kevin turned up a little later and had one rainbow from Heron Lake. The air temperature was 9C but the water was a chilly 5C.  The sky was overcast with occasional light drizzle.  The weather forecast I watched earlier was giving a clearance at lunchtime but in the event we were treated to some heavy rain and strong westerly winds.

Although the lakes are stocked with a variety of trout - rainbows, golden, browns, blues and tigers - we only saw rainbows in our bags but with a total of 18 between us it was a good day out.  The biggest rainbow was landed from Kingfisher Lake by John Bright (we saw the kingfisher several times by the way!).   At 3lb 4.5oz John is the winner of the competition and is now currently leading the 'Traveller's Trophy' race for the biggest trout taken on an away day.  There is a long way to go until November, John! 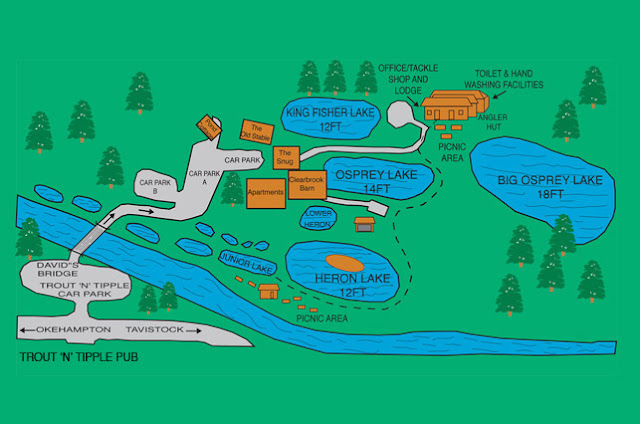 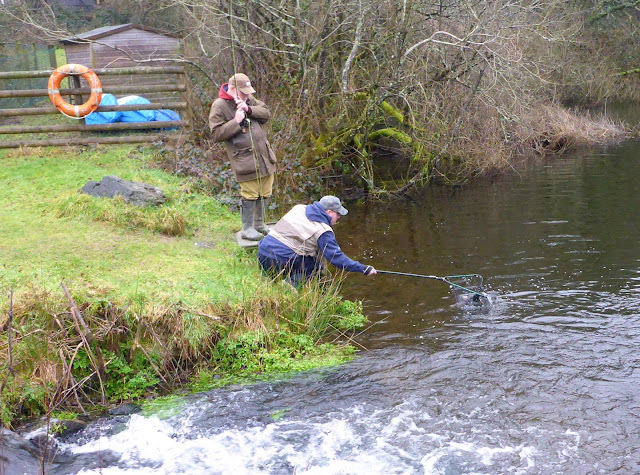 
1. TITLE
1.1 The Club shall be called the Burrator Fly Fishers Association


2. OBJECTS
2.1 To facilitate and encourage the practice of fly fishing at Burrator Reservoir and elsewhere with due regard to the environment.


2.2 To foster the interest of adult and junior anglers wishing to develop their fly fishing skills and to improve their sport.


2.3 To liaise and co-operate with South West Lakes Trust and work with them to improve fishing and facilities at Burrator Reservoir.


3. MEMBERSHIP
3.1 Membership is open to anyone who is genuinely interested in fly fishing, wishes to take part in the club activities and is prepared to abide by the rules of the Association.


3.2 Applications are to be made to the Treasurer in the first instance.


3.3 Members must hold a valid Environment Agency licence before fishing.


3.4 There shall be three classes of membership available.  These are:
Full Member - Adults over the age of 18 years.
Junior Member - (Under 18 years of age) Junior members up to the age of 16 years shall always be in the company of and the responsibility of either his/her legal guardian or an adult member  designated by his/her legal guardian when attending association events.  Members aged 16 to 18 years may attend without their legal guardian.
Honorary Member - The members at an AGM may from time to time decide to offer Honorary Membership to someone who is considered to merit it.  This would normally only be applied where the member is too elderly or frail to continue fishing and/or has given outstanding service to the Association.


4. OFFICERS
4.1 The Officers of the BFFA shall be as follows:
Chairman - who will chair all meetings of the Association and take the lead role in any discussions/negotiations with other agencies.  The membership, at their discretion, may also elect a Chairman Designate.


Secretary - who will minute all official meetings and circulate these to members. He/she will also receive and deal with all correspondence to and from the Association with the exception of membership matters and club insurance.


Treasurer - who will deal with all routine membership matters and club insurance and keep fair and accurate records of the Associations finances.


Social & Competition Secretary - who will plan and organise the monthly competitions, monthly raffles and other events.


4.2 Officers shall be elected/re-elected at the AGM each year by a majority of members present.


4.3 In case of illness or other unforeseen circumstances Officer roles can be filled by co-opting an appropriate adult member of the Association.  This co-opted status can last only to the next subsequent AGM or EGM.


4.4 No Officer shall be re-elected to the same role for more than three successive years.


5. SIGNING CHEQUES & PAYING BILLS
5.1 All cheques and other bank transactions will be authorised by the Treasurer and one other of the Officers named above.  Two signatures will be required.


6. MEETINGS
6.1 Annual General Meeting (AGM) - is to be held in January each year. Members shall be given 21 days’ notice of the date.  Members will be invited to submit items for the agenda and that agenda will be circulated to all members at least seven days before the meeting.  This will include proposals (with seconders) for any Officer role.  All matters at the AGM will be decided by majority vote of those present.  In the case of a tied vote the Chairman will have a casting vote.  The AGM will receive reports from the Officers including a Statement of Accounts on the basis of which subscription levels for the coming year will be agreed.


6.2 Emergency General Meeting (EGM) - will only be held in exceptional circumstances when, for example, the Association needs to decide on an urgent matter which cannot wait until the next AGM.  A majority of members must vote in favour of calling an EGM.


6.3 Monthly General Meetings - will be held eight or nine times throughout the year.  Normally there will be no meeting in August, the meeting in December will be the Christmas social event and the meeting in January will be the AGM.  These can be changed by a majority vote of the members.


7. BOATS UNDER THE SUPERVISION OF THE ASSOCIATION
7.1 During the period in which the Association has access to boat fishing at Burrator and helps SWLT to manage these boats.  The rules and conditions for their use will be reviewed annually by BFFA and SWLT representatives and updated as necessary.  These will be issued/re-issued to all BFFA members wishing to use the boats.


8. DISCIPLINARY MATTERS
8.1 Should any member seriously and/or persistently breach the Association rules or jeopardise its continuance, the member may be asked to leave the Association and their membership fee returned.


8.3 Throughout the process Principals of Natural Justice will be adhered to.


9. DISSOLUTION OF THE ASSSOCIATION
9.1 The Association will only be dissolved at either an AGM or an EGM called for that purpose.


9.2 For dissolution to take place two thirds of those present must agree.


9.3 On dissolution the Officers in post at that time will realise all assets and discharge all debts.


9.4 The members present at the dissolution meeting shall decide by a simple majority how to dispose of any remaining monies by, for example, donation to an appropriate charity/organisation.