I have been thinking of buying a boat seat for some time having made my own last year. They make a big difference in terms of fishing comfort. However my botched up seat made from an old helm seat and some marine ply, whilst comfortable, took an age to fit to the boat, and going through this fitting process whilst having to listen to my regular boat partner, our venerable chairman Peter's helpful remarks on my workmanship led me to look for a professionally built replacement. The other reason was that when Peter and I were in Scotland last year the seat started to break and was in danger of tipping me into the water! I spent ages researching different seats, I decided I didn't want a traditional thwart seat as these position you quite high up creating a high centre of gravity which some say is dangerous in rough weather. The Airflo TDL seat seemed to be the best bet as it came highly recommended is quick to fit and safe. The only downside is the price, at £129.99, the best price I could find online at Fishtec it seemed pretty expensive. I had assumed online would be the cheapest option however last time I was in Exeter angling I asked if they had any seats and they showed the seat in the picture. 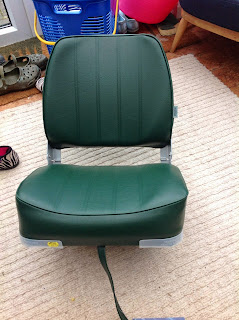 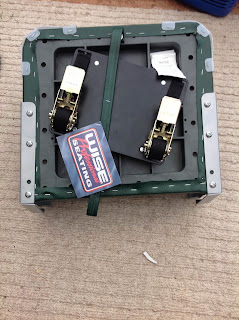 Though this looks identical to the Airflo TDL seat, its actually made by an American company called Wise and it was priced at £99.99, they gave me a further £10 off so at £89.99 it was too good to miss and I bought it. On closer examination I am sure it's the same seat as the Airflo one, it has a ratchet strap system to attach it to the boats thwart quickly and safely and looks well made. I have yet to try it out but I think this was a bargain. I only saw one on these on the shop floor, so if you fancy one of these give Exeter Angling a ring first.

Below are a few flies I have tied recently.Not a great photo but clockwise from the top are my version of a cul-de-canyard sedge, a silver invicta, a traditional invicta, two cripplers and two dabblers. The Crippler is a fly that was invented by a chap called Ron Denson. His site here  is excellent and I have been trying to copy his patterns with mixed success. A lot of them involve Golden Pheasant body feathers which was a new material to me and is a bit tricky to use. I think I am starting to get the hang of it, though my versions of his flies are nowhere as good as his. 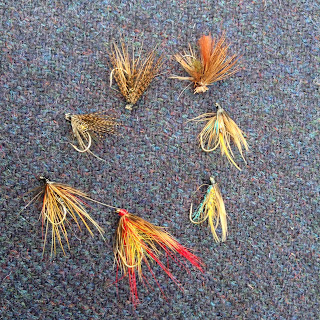 A visit to Blagdon - OK but no big deal

On Tuesday 22nd April I made, together with Jon Perry, my first ever trip to the iconic Blagdon Lake in North Somerset. A forty-five minute drive from Plymouth found me at Jon’s home in Exeter, and from there we set off on the country route to this famous Bristol Waterworks reservoir. Jon, being a native of this area, knew the back roads like the back of his hand, as they say, and I soon became familiar with them also.

Eventually we arrived, found our pre-booked boat, and got down to the fishing. We had taken the precaution of also booking an outboard motor, a nice little four HP four-stroke; quiet, clean, and perfectly efficient, though we would probably have been OK with my electric motor. On another occasion I would not pay the extra £14.00 on top of the £62.00 for the boat itself.

Anyway, as to the fishing itself, it was not that easy. I boated five rainbows for a total weight of 12lbs exactly (an average of approximately 2lb 6oz). Jon had one fish of about the same size. We had numerous other takes but it was not exactly fast and furious. All fish were caught on an intermediate or a sinking line. Jon had the only hook up on a floating line by casting to a fish which showed in a small bay near the boathouse. Unfortunately it didn’t stay connected. The killing flies were mostly traditional lake wets such as Invicta, Claret Bumble and Golden Olive Bumble. Though we, more or less, went through our boxes. I suspect that it was not the fly which mattered so much as getting the right depth and speed of retrieve (two to four feet down and quite slow). Such flies as we saw on the surface seemed to be mostly Olives and Buzzers but hatches were few and far between.

The weather was very mixed. We got a really good soaking on and off during the day, and it was consistently breezy, with very overcast conditions most of the time, interspersed with occasional bright sunshine.

Given that Blagdon is famous around the world for the quality of its trout fishing and the fishing experience itself; it even appears in a book called Fifty Places to Fish before You Die, I would say that whilst I didn’t dislike the place, I was a bit underwhelmed by it. The fish, though bigger, on average, than we are used to at Burrator seemed in less good condition; there were damaged fins or worn tails on all the fish we caught and, though I may be accused of being a ‘tightwad’, I felt that £76.00 for a boat for the day was more than it was worth even though that price included an OAP concession for me. Having said that, it was not the most idyllic of days weather-wise and I will withhold judgement until a further visit, to experience the evening rise, in warmer weather; perhaps at the end of May.

I have to say that my best fish of the day was the large size cod (and chips) from the chippy in Churchill village on the way home - highly recommended, but more than even a man of my notorious appetite could finish. I'll have the smaller portion next time - perhaps.

Here are a few more pictures. 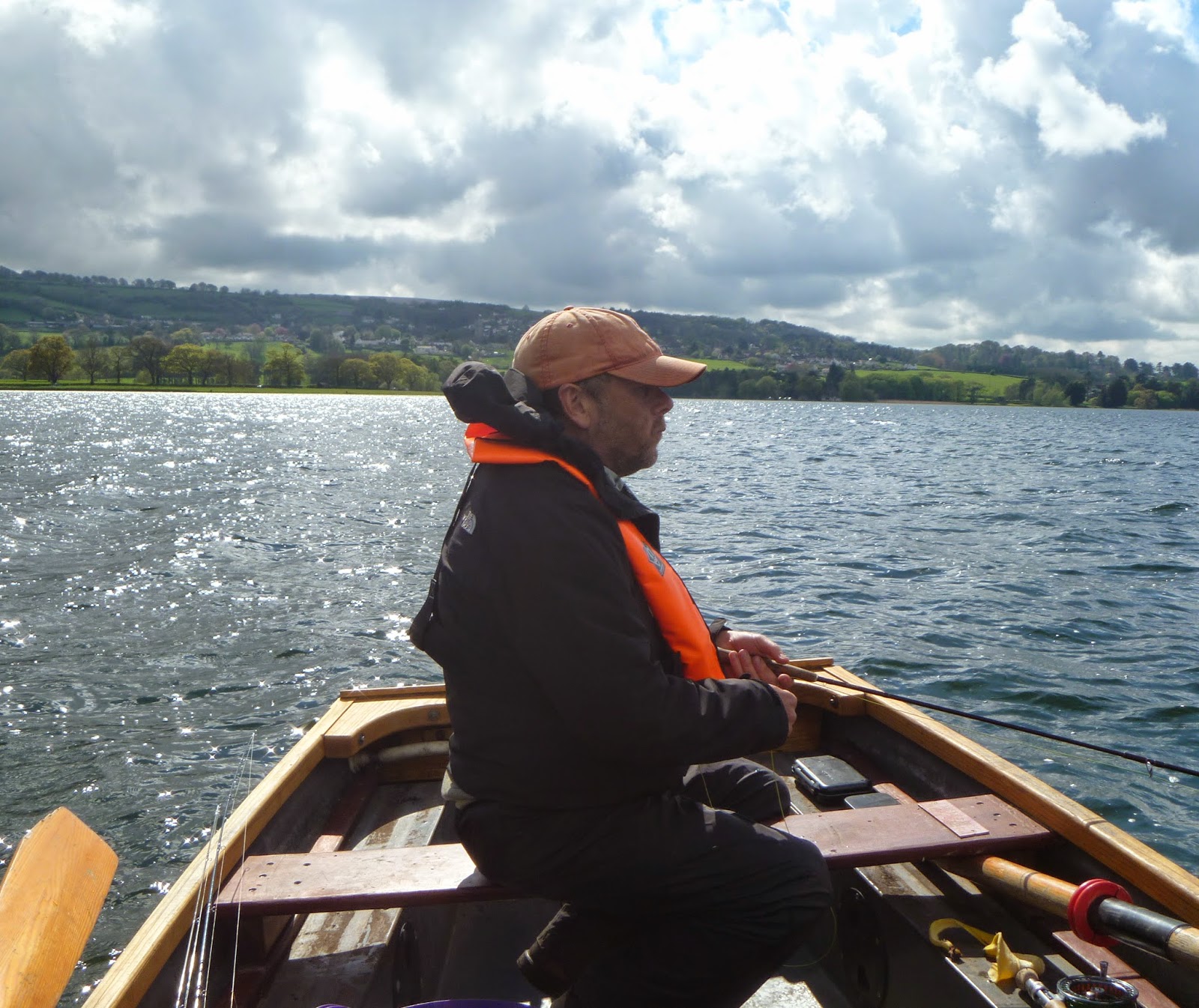 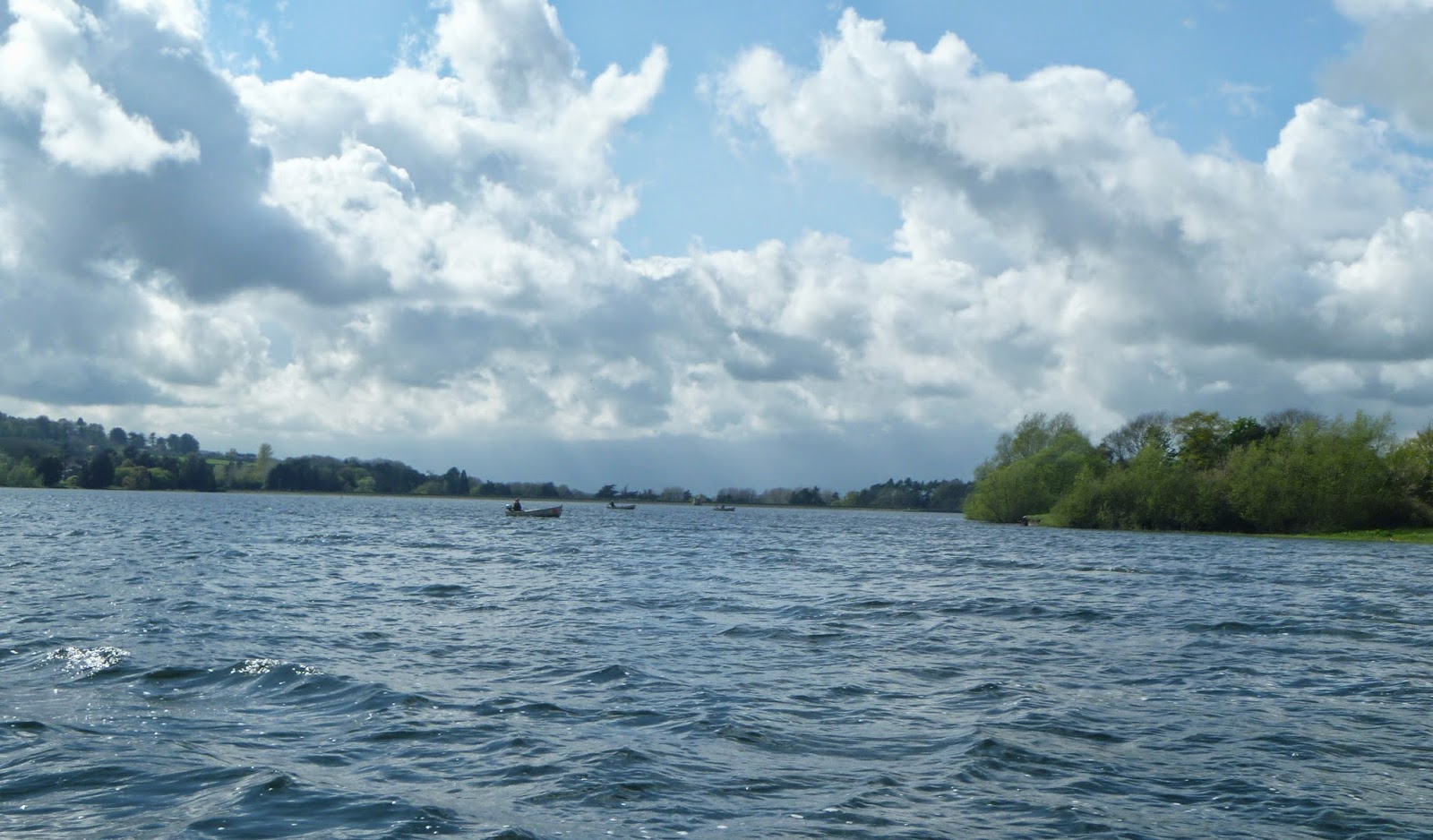 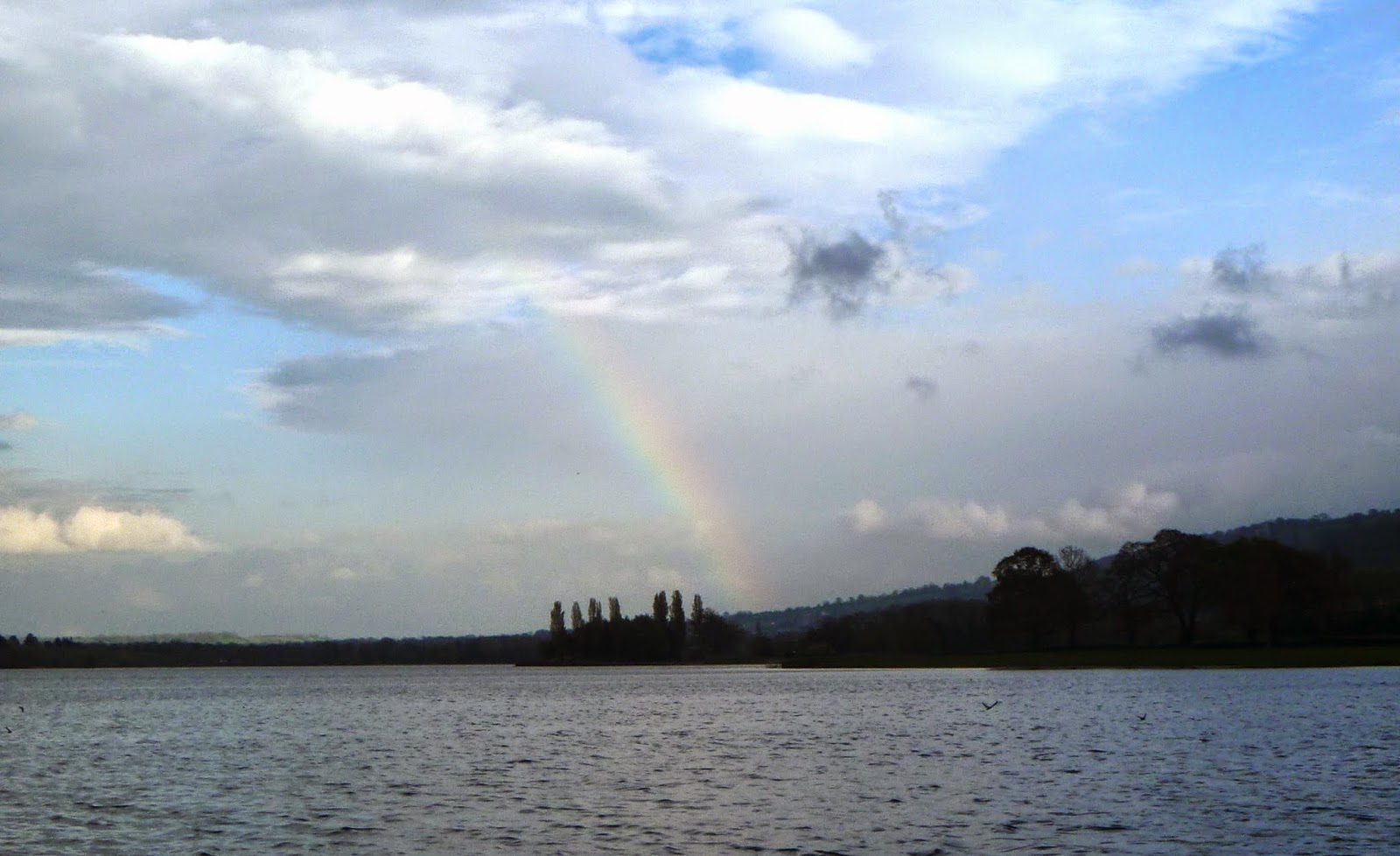 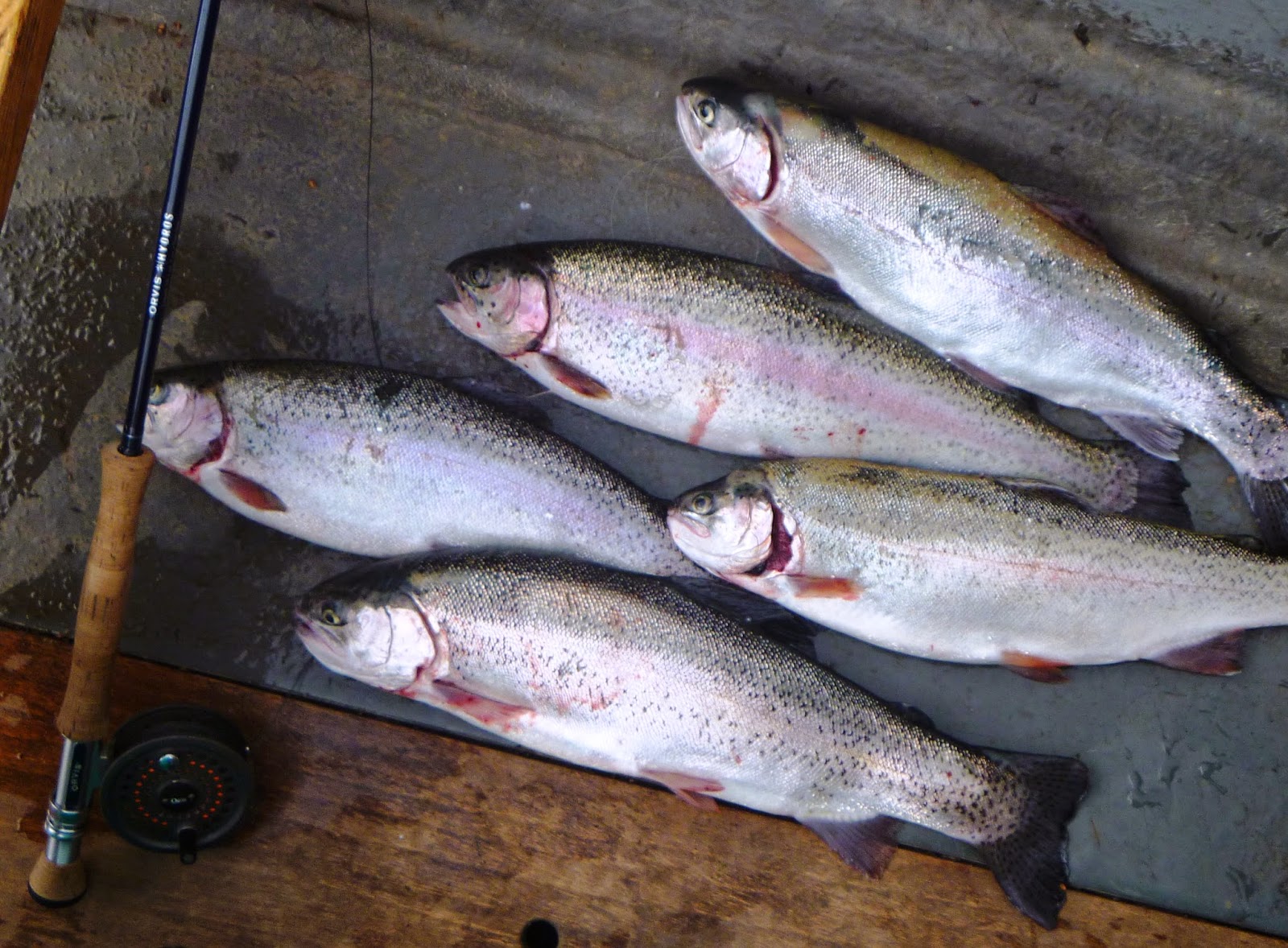 Posted by Peter Macconnell at 17:24 2 comments:

Fishing into the wind - key to success at the moment

On Wednesday I had no difficulty in catching my five fish limit from the bank in addition to having a brownie of about three quarters of a pound which I released. The trick seemed to be to fish into the wind and to retrieve quite quickly. I fished from about 10.00am to 4.00pm and hooked a number of other fish than those I landed. It was quite clear that the fish were actively feeding just below the surface where food was being blown into the bank. My efforts to fish on the other side of the peninsula, and on the point,  with the wind behind me, meant easier casting but almost no takes. The sacrifice of distance, the effort required to point the rod down on the forward cast, and  to push the light (WF6F) fly line into the wind really was worthwhile. The weather was bright but still a bit chilly and the wind south-easterly. I fished the same cast all day; a Size 10 Invicta on the point and size twelve Cruncher on the dropper.

Posted by Peter Macconnell at 16:58 No comments:

A Nice Brownie from Longstone 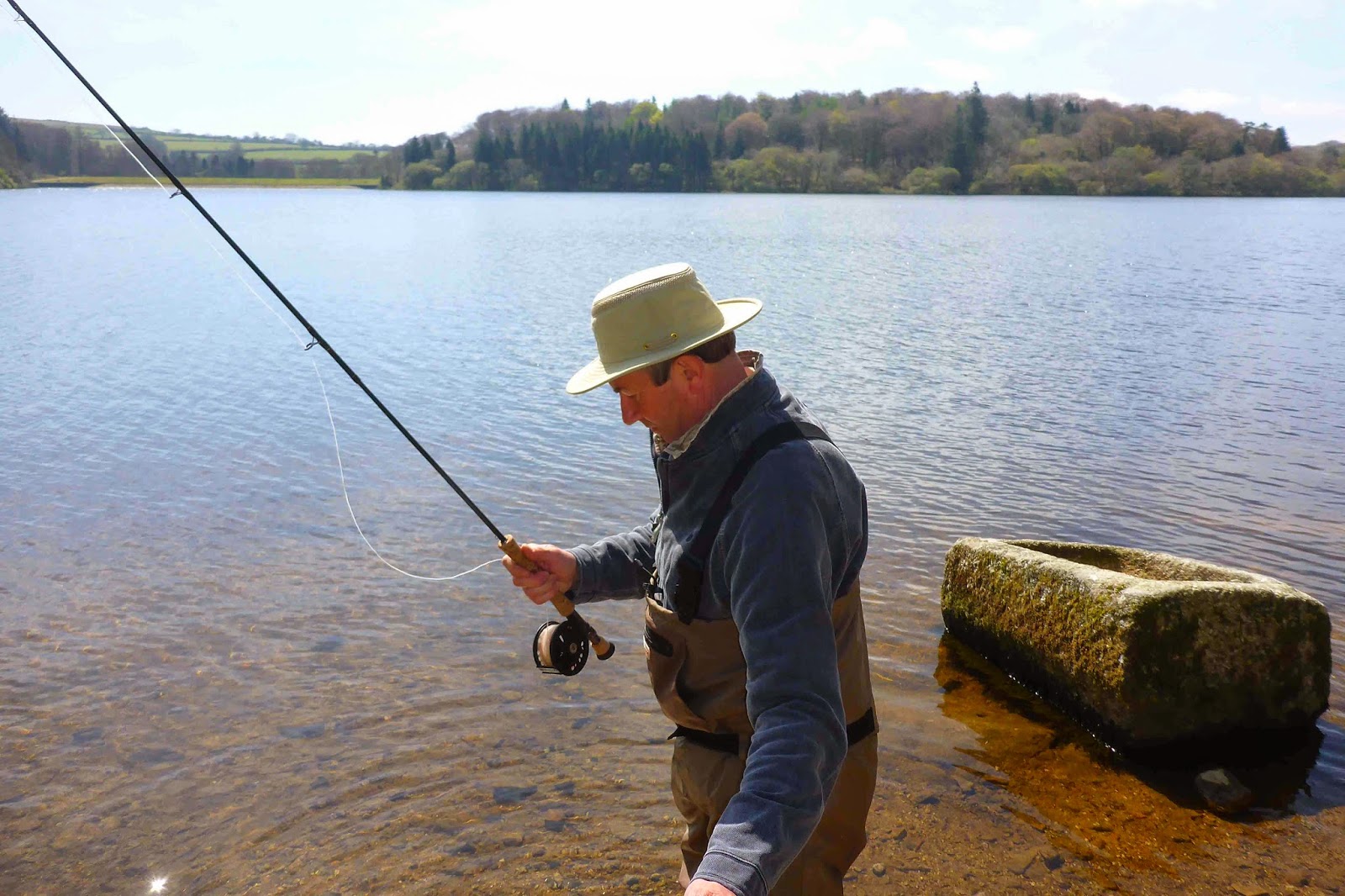 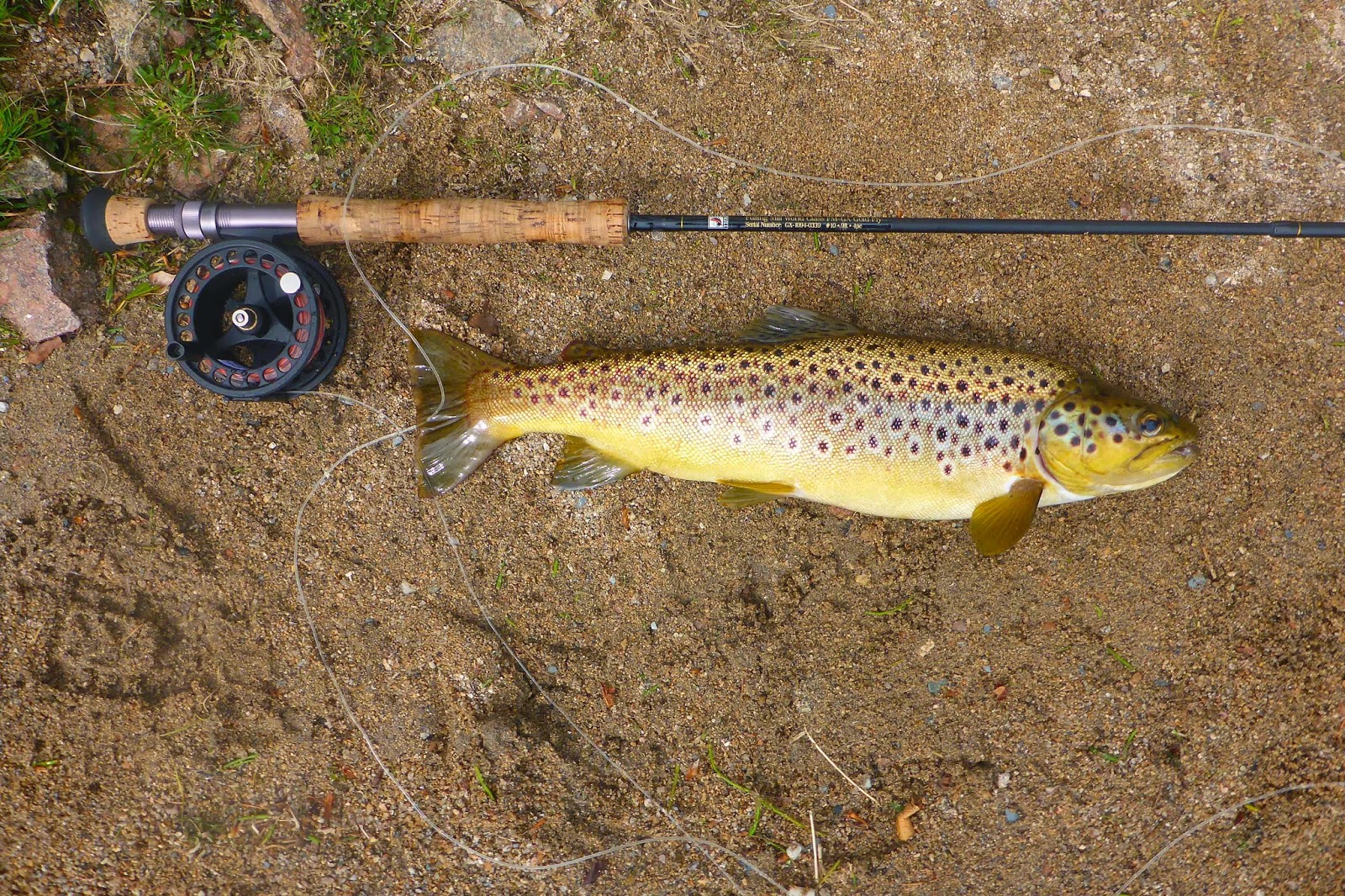 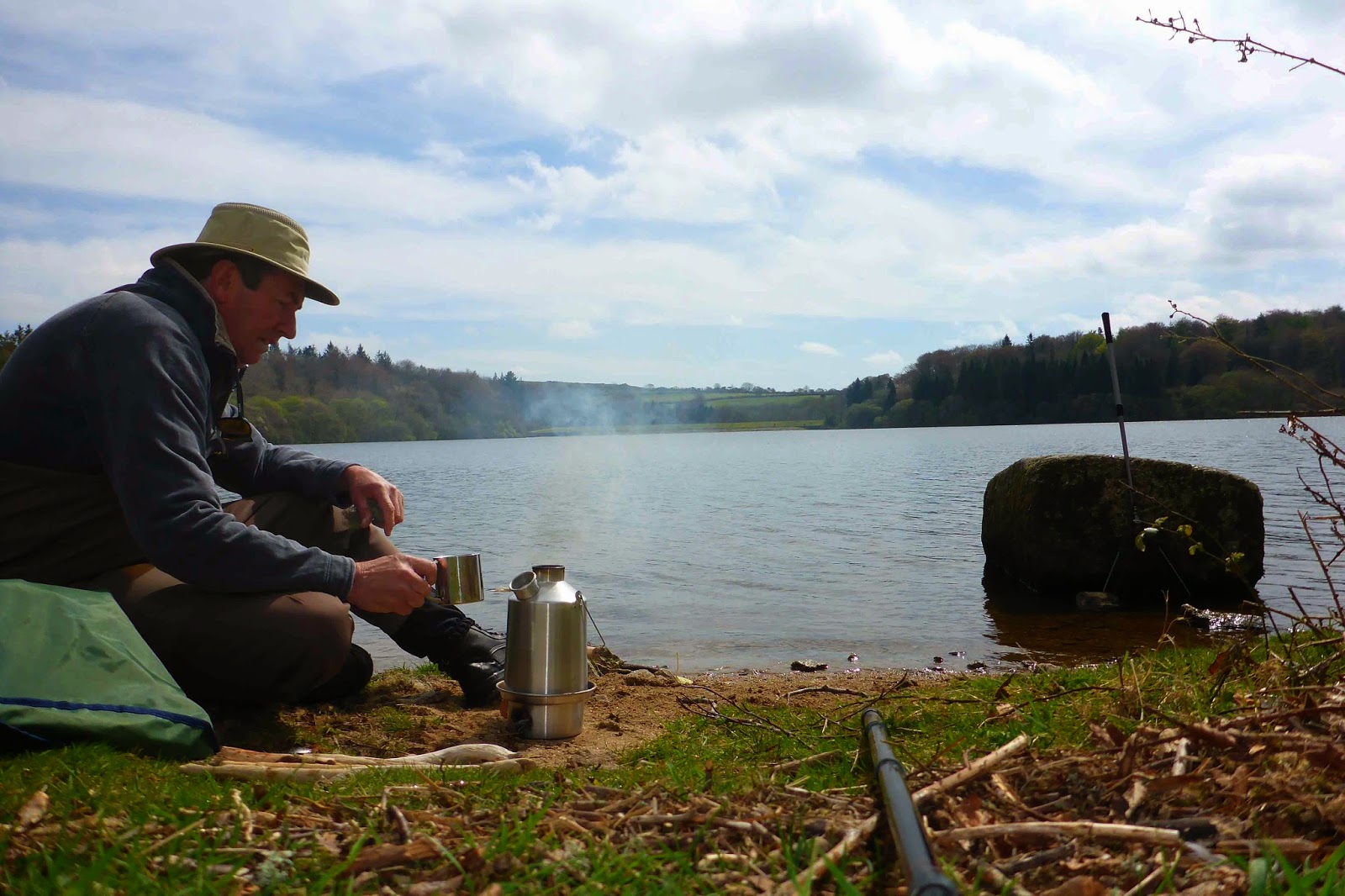 I drove first around the reservoir before deciding where to fish.  I was pleased to meet Kit, the SW Lakes Trust warden, at the recently opened anglers' ticket hut and introduce myself.  Over at Longstone I was easily able to drive my mother-in-law's small Kia Picanto in through the gate and over the rutted ground left by the tree-felling contractors.  A little while later Pat and then Mark arrived.  They both fished around the point area while I stayed at the trough.

I saw very few trout on the surface but had quite a few unconnected plucks and tugs using a slow sinker and various flies - Montana, Diawl Bach, booby etc.  In the afternoon the light breeze increased and went around more northerly bringing cloud cover and an unwelcome drop in temperature.  I landed three rainbows - biggest about 1lb 12oz - and a lovely surprise brownie of around 2lbs on the orange booby.  After a quick photo it swam off strongly.

I was glad to have the use of my Kelly Kettle to produce four very welcome brews during the day - a great piece of gear.
Posted by Tony Hooper at 16:30 No comments: 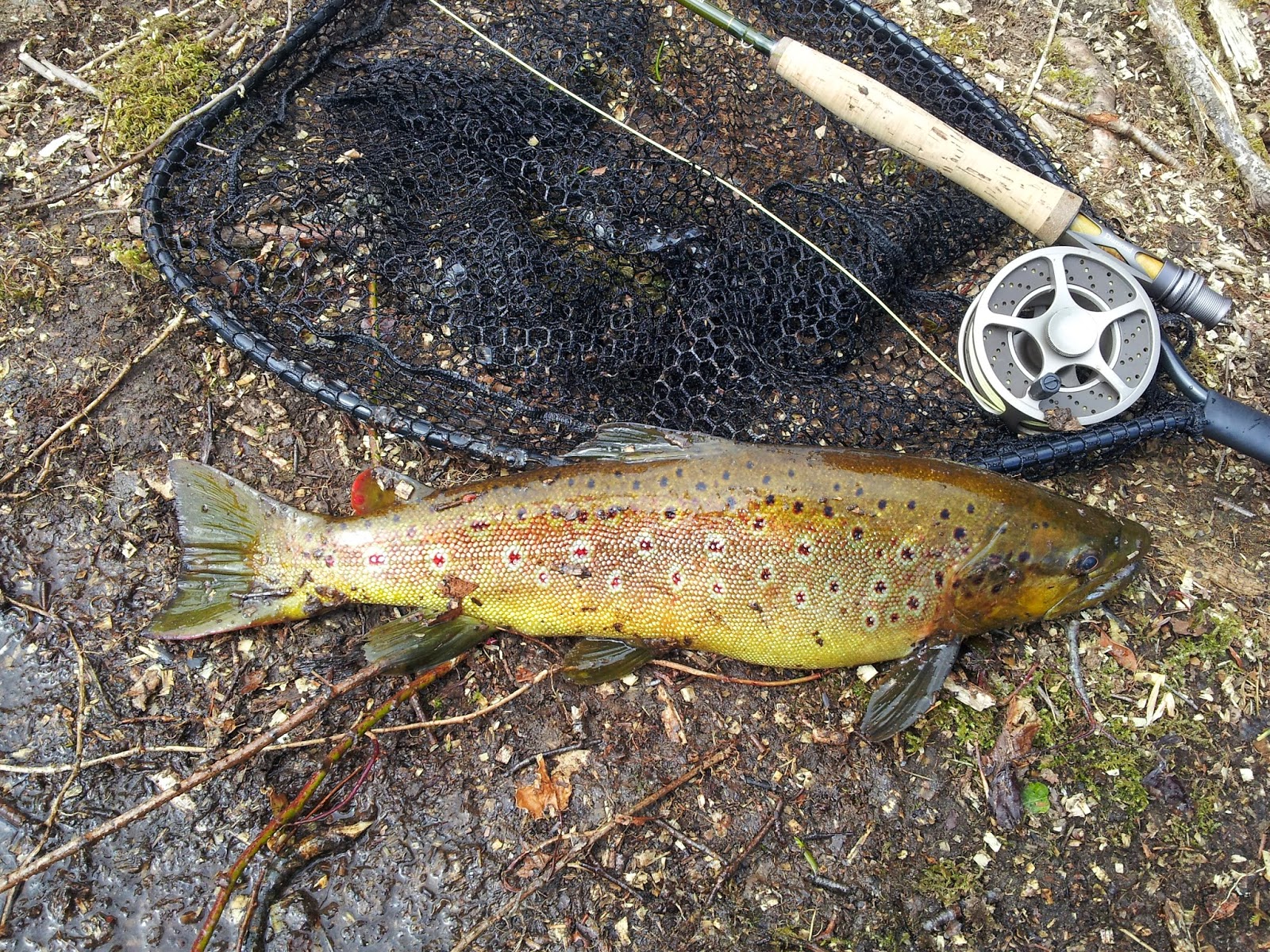 After catching a couple of Rainbows knew this was something different when the fish hit the fly and raced off to the deep water stripping the line down to the backing.
Took a quick photograph then safely returned to the water to fight another day.
Posted by Unknown at 15:26 1 comment:

Fly fishing from the West Side of Burrator 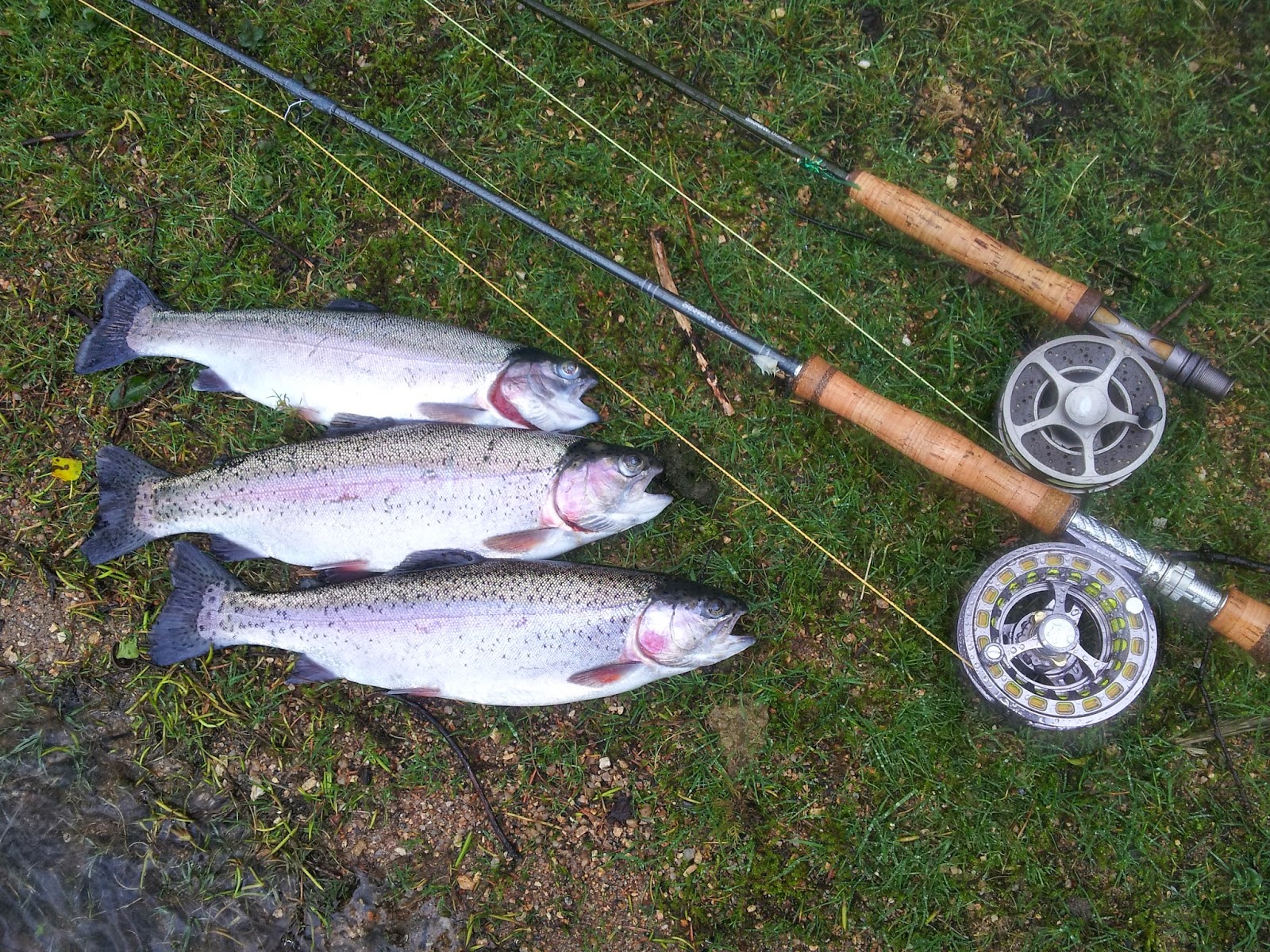 A rainy Sunday with strong southerly wind but decided to try the west bank after speaking to Alan one of the bailifs. He had recenetly fished there and caught a nice sized Brown along with a few Rainbows. Never had any luck that side before but it would be worth trying as now stocking from that side.
Normally fish the Peninsula but with all the chaos from the logging going on it made sense to give it a try. Very little thought appears to be given to the fly fishing along the Peninsula as the middle section is almost completely flattened and trees are still remaining along the waters edge with no extra bays created to allow for a backcast.
After a two hour session on the western side caught three hard fighting fish on an intermediate line and went home happy.
Posted by Unknown at 15:07 No comments:


I went to Burrator on Sunday 30th March for my first fishing trip of 2014.  Although beautifully warm in the sun there was a cold, gusty 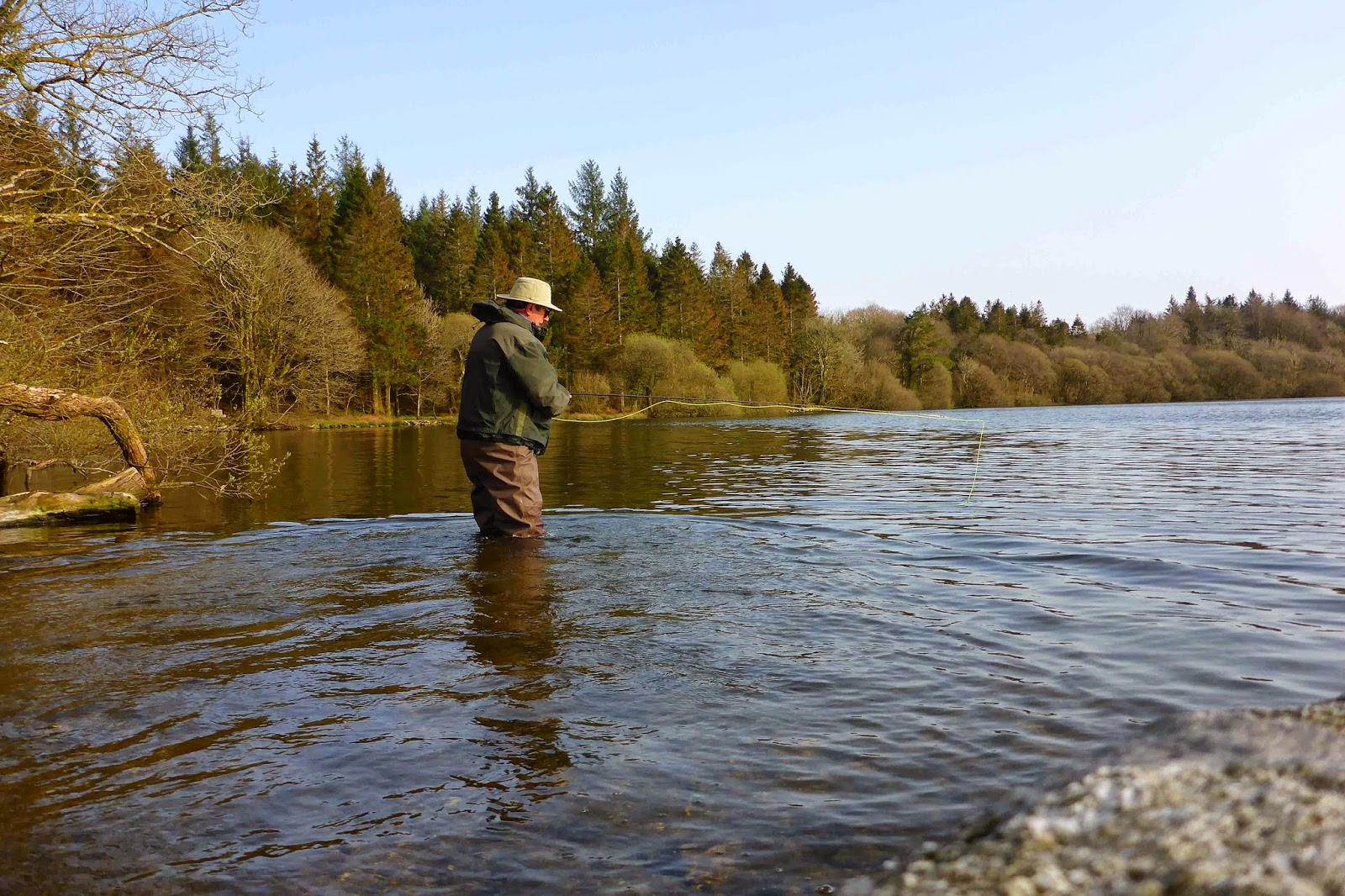 south easterly blowing which seemed to affect every shore except the very tip of Longstone Point.  Unfortunately, it being a Sunday, the area in front of the granite bench was occupied all day by picnic-ers.  The water level was up over the sills on the dam and even wading out a little way, the backcasting was quite testing as my depleted fly box reveals!

The tree-fellers were not working but I would like to have asked them to take down more of the trees along the waters edge while they were virtually clear felling the rest of Longstone including lots of beech.  I did have one rainbow on a black & yellow Montana fished deep but otherwise saw nothing moving at all. Two other anglers I spoke to blanked.
Posted by Tony Hooper at 17:06 No comments: