I thought I would post about my own trip to Ireland the week before Peter's trip to join Tony in West Cork. Myself and two friends, brothers Phil and Kevin Stuckey, headed some 60 miles further west from Courtmacsherry to the Beara Peninsula. This is a rugged finger of rock that pokes out into the North Atlantic between Bantry Bay to the south and the Kenmare Estuary to the north. The three of us have been going to this area for several years now to fish rock marks, mostly with soft plastic lures on 40gm spinning rods for large Pollack, Wrasse and anything else that will take a lure. We also do a bit of bottom fishing for Conger, Ling and other species and float fishing for Mullet and this year Trigger Fish. We had a great time catching Pollack to over 11lbs from the rocks, loads of Wrasse and some big Conger. Mullet proved hard to tempt though Phil and Kev managed a few from a deep water mark. The Trigger fish were weird and we caught quite a few. It has to be said these do not present much of an angling challenge, on the day we encountered them, using mackerel as bait, we caught and returned every fish in the shoal before they wised up and departed. I recommend Beara, the scenery is superb and the fishing terrific, though as can be seen from the photos many of the marks are rugged and hard to access requiring fairly long hikes over rough ground. I have caught quite a few fish on fly, I've included one photo from a previous trip. Didn't get any on this trip though it has to be said I was not trying very hard. Photos below are a mix of this year and last time we went as I forgot my camera this time so only had my phone. 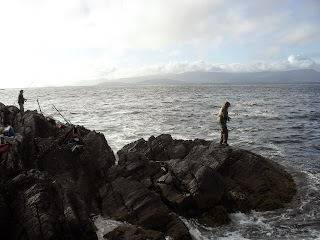 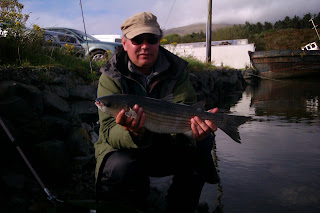 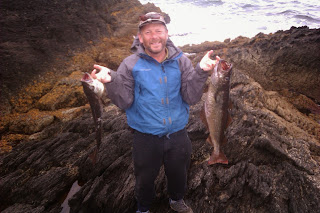 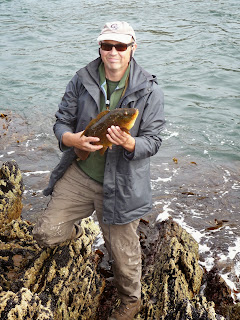 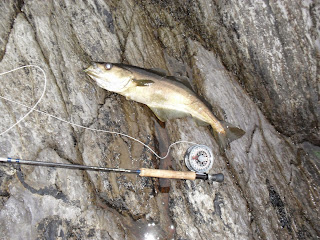 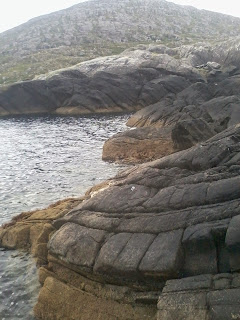 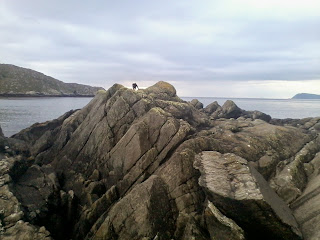 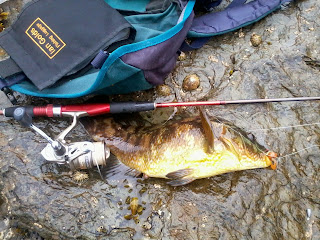 Posted by Jon Perry’s Angling Blog at 11:36 No comments:

I was lucky enough to be able to go to West Cork for 10 days from 10th to 20th September. I went the long way round; Plymouth to Pembroke Dock in South Wales, then on the ferry from Pembroke to Rosslaire, and then overland through Wexford, Waterford and Cork to Courtmacsherry.

For the first week I stayed with Tony Hooper, his wife Sue, John Williams a mutual bass fishing friend from West Cornwall, and his son Chris, at Anchor Bay Cottages in Courtmacsherry; very nice digs indeed, and excellent company. Tony, it seems knows everybody, and most of the pubs, in West Cork and they all know him, so that made it all the more fun.


As well as catching the bass shown in his report together with one or two others somewhat smaller, I managed to lose my passport and my driving licence! It happened like this:

In preparation for a trip with Tony in his inflatable boat, I was sorting out my fishing bag at the back of my car. On noticing that my passport and driving licence were in the bag I thought ‘Oh, I need to take those into the cottage where they will be safe’. So I temporarily put them on the roof of my car while I finished getting my gear ready. I then forgot they were there. Well, you can guess what happened next, yes, I drove off down the road with them still on the roof! Two days later my passport turned up after someone had handed it in at the local lifeboat station and my driving licence ended up being posted back to Plymouth, courtesy of a kind lady from Dublin who found it on the road to Timoleague! Anyway, despite the anxiety that they might not let me leave Ireland without my identity papers, I had an excellent time.


After that I went down to Rosscarberry to stay with Mike Duckett and Tony Vallack in their luxury rented bungalow; which was also very nice. They had arranged to fish with a local guide, Pete Aspinwall, from his small boat. It turned out he was taking them to one of the places I had been with Tony Hooper earlier that week. Sure enough he put them on a few bass as well as a bonus sea trout.

In the latter part of my stay I had hoped to catch some mullet, possibly on the fly, from the saltwater lagoon at Rosscarberry, a well know Cork mulleting spot, but it was not to be, and after ten days and many pints of Guinness and Murphy’s I made the long journey home via the Rosslaire to Pembroke Ferry.
Posted by Peter Macconnell at 16:10 No comments:

September in Ireland Part I


Yet another away trip for some BFF members!

I make an annual September bass fishing pilgrimage to Courtmacsherry, West Cork in Ireland and this year I was joined for a week by Peter Macconnell.  We also  met up with Mike Duckett & Tony Vallack who were staying at Rosscarbery – about 15 miles west of where our cottage was. Peter later stayed with Tony & Mike at Rosscarbery.

I take my Avon inflatable & outboard which gives another dimension to the fishing.  I had almost four weeks of sunny weather but the wind was firmly in the east for the first couple of weeks.  My wife, Sue, travelled over with me but flew back early to resume grand parenting duties.  She landed the first bass of our trip – a 3 pounder – and declared that “this bass fishing is easy, I may well take it up…………”

I took Peter out in the inflatable to fish the estuary.  It was quite breezy and as the tide was ebbing strongly I tied up to a handy buoy.  Peter had a positive bite and a bass raced downstream with the tide.  In the excitement Peter lost his hat (never to be seen again!) while I quickly let go the buoy to follow the bass.  Luckily it stayed the same side as us of the numerous buoys as we were carried along by the current.  Peter eventually got it to the boat where we netted it, took some scale samples and weighed it at 7lb 8oz before returning it to the water. Result for our chairman!

Driving from Plymouth to West Cork via Fishguard or Pembroke and back is a round trip of about 900 miles so Sue & I travelled on Brittany Ferries’ flagship from Millbay Docks.  The 41,000 tonne MV Pont Aven sails from Plymouth to Cork via Roscoff at weekends as well as doing two trips to Spain during the week.  Total driving was about 34 miles each way!  The extra cost of this route was offset by the saving of three tanks of diesel for the Jeep and a relaxing cruise.