As in previous years I have resisted the urge to drive over 400 miles each way from Plymouth to the rented house in West Cork and have instead taken the Brittany Ferries flagship, Pont-Aven, from Plymouth to Roscoff and then on to Cork. A drive of about 35 miles each way. The house we rented enjoys a great location in Courtmacsherry looking up the estuary of the Argideen River, a well known sea trout stream.

Kelvin had never been to Ireland and had never fished for bass.  He showed us how it was done though, landing a nice bass on his first cast in Irish waters.  He had 5 good bass in all during his trip.  All fell to the charms of a Snowbee rhubarb & custard plug.

Kelvin & Peter were due to hire one of Mark Gannon's 16 foot self drive boats for 5 days but the weather was anything but settled so they had just two days afloat.  There are usually plenty of pollack around the bay and we like to catch a few for fish pies, fish & chips, fish cakes etc.  This year we struggled to find any numbers even when the weather and sea conditions let us get out to the usual reefs and headlands.

One of the photos below shows the Courtmacsherry lifeboat on a shout to assist a yachtie.  The lifeboat is a 14 metre Trent class and as they were going at full chat down the estuary one of the crew told me later that they noticed me fishing on a sandbank that was almost covered by the flooding tide.  They sounded their klaxon and realising that I may get wet I turned to wade back but at that moment I had a bass take the sandeel.  The wash looked worse than it was in reality but I did get a few photos and land the bass!  Later, in the Anchor Bar one of the crew told me that a yachtsman had dislocated her shoulder and was unable to sail the boat so the lifeboat took it and the yachtie into Kinsale.

I had been in email correspondence with Dr Ciara Wogerbauer at the Irish National Bass Program in Dublin.  Her team are collecting data to assist the Inland Fisheries Ireland in a long term bass sampling and research program to manage stocks for recreational anglers.  Unlike the UK where commercial fishermen are permitted to retain 1.3 tonnes of bass per month there is no commercial fishing for bass in Ireland.  Ciara asked if we could take scale samples from bass we landed before returning the bass to the water.  Recreational anglers are permitted to retain 1 bass per day but almost all of ours are quickly returned.  We did finish the visit with plenty of scale samples that I will be sending to Dublin with a short report.

My four and a bit weeks went in a flash while other guests came and went.  All too soon it was time to pack the car and drive to the ferryport at Cork for the return to Plymouth.  This year I landed 8 bass but in previous years I have had nearly 100 over the same sort of period.  I hope the research will discover some useful information. 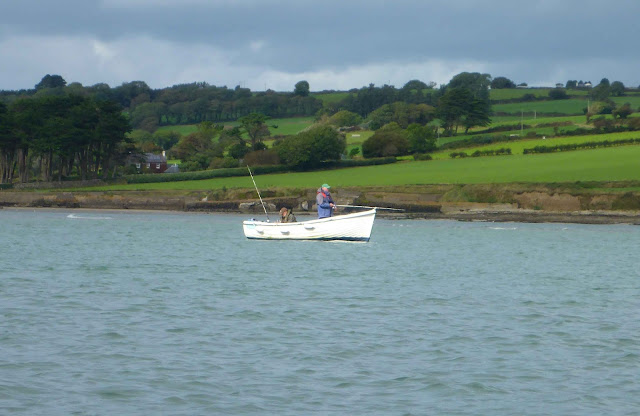 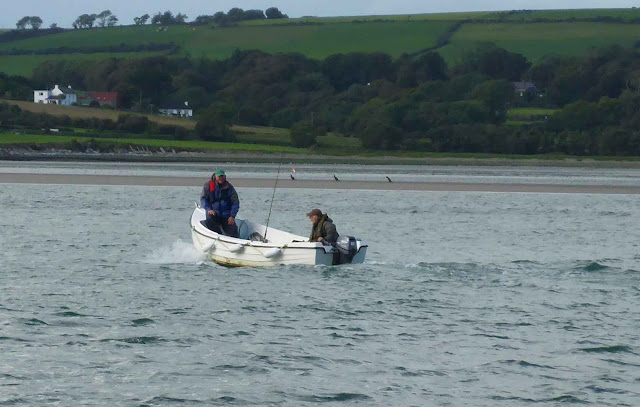 Peter Macconnell added a some photographs and a paragraph on 3rd November:

As Tony's guests in Courtmacsherry, Kelvin and I traveled in my car,and spent nine days there from 20th to 29th September. I thought I would add a couple of pictures, not least because they record Kelvin catching his first (and second) bass all on a cheap Snowbee plug. He caught five altogether which was more than me. I was very pleased for him!