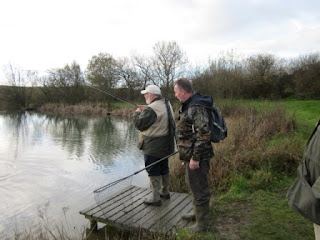 A difficult day at Bake Lakes
The first Burrator Fly Fishers event of the year took place at Bake Lakes on Saturday 25th February when seven members turned out. For most of us it was the first chance this year to take out the fly rod and get our casting arms moving. There were also plenty of fish moving on or near the surface. However, despite the obvious willingness of the fish to feed, all but one member found it to be an extremely frustrating day. Whether it was buzzers, traditional wets, or lures, the trout seemed preoccupied with something else. Peter Macconnell was the only member to winkle out fish, catching a couple of rainbows for a total weight of  5lb 7oz. He lost another rainbow and a very large out of season brownie at the net.
Posted by Peter Macconnell at 16:00