Five members visited Bellbrook a fishery near Tiverton to sample the fishing in the six lakes.
www.bellbrookfishery.co.uk  There are a wide range of tickets available that started at £20 for catch & release to a 6 fish limit at £55.  One of the six lakes - Ironmill - is a specimen lake stocked with rainbows, blues & browns from 4lb up to very large fish that includes doubles.  The other five lakes are stocked with 2lb plus trout.

I was staying with Sue in our caravan for a few days near Tiverton.  It wasn't far to Bellbrook from the caravan site on the Grand Western Canal for the 10am start.  I arrived as TonyV was cooking the bacon baps (perfect timing & excellent, thank you Tony!).  Tony, Pat, Bob & Kelvin had travelled up from Plymouth. The fishery owner, Chris Atwell, arrived as we were buying our permits.

The fishery is based on two small valleys with the specimen lake in one valley and the other five in the next valley.  All of us headed down to the specimen lake where the fishing is from wooden platforms around the lake. At times we could see the trout in the fairly clear water and on several occasions I watched fish come up to my damsel nymph fly only to turn away at the last.  At lunchtime I walked back up to the fishing hut and then up the other valley to try another lake with Kelvin and Tony.   It was sunny and warm so we had left our waterproofs at the cars.  Needless to say, we hadn't been fishing on Exmoor Lake long before a very black cloud headed our way accompanied by a very heavy shower of rain.

I changed to a dry black daddy long legs alternating to a black gnat from time to time.  I had one rainbow on the dry daddy which later went 2lb 12oz.  At 3pm we met at the hut for the weigh-in.
Pat had taken one rainbow on the specimen lake and at 5lb was the winning fish. Bob had one for 3lb 13oz, and I had the one of 2lb 12oz.  Kelvin & I decided to fish on after the others had headed back to Plymouth and we went up to Sedgemoor Lake where Kelvin had a rainbow of 3lb on a floating black beetle.  I persevered with the dry fly but was quite unable to connect with all the swirls and pulls from apparently interested trout. 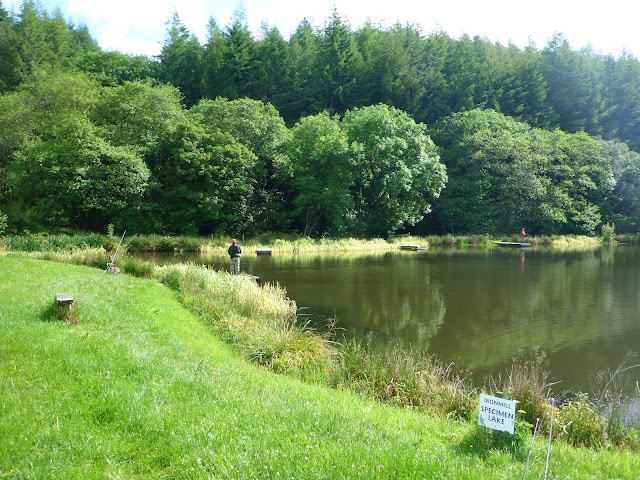 Return to the Highlands - Part I

For the last three years fellow BFFA member Jon Perry and myself have made a trip north to fish for wild brown trout in the Scottish Highlands. In 2013 we went to Caithness, mainly to fish the famous Loch Watten. Our posting on here from June of that year, 'Watten Long Way to Go', tells the story. Then for the last two years we have based ourselves in the Lairg/Loch Shin area of Sutherland, about seventy miles north of Inverness. Both those trips are recorded in blog posts on this site. This year we went to the Loch Shin area again but with four key differences:

The House and the Estate
Jon found the accommodation once we had decided that there would be four of us and that we would go for up to two weeks. I only stayed eight days, I didn't want to push my luck after last year, but Jon Phil and Kev stayed the whole of the fortnight; hence this being Part I. Jon will post about the second week in Part II. What Jon found was a four bedroomed house in beautiful scenery with both loch and river fishing included, set in a private highland estate. This proved to be fabulous value for money with absolutely heart-lifting surroundings and exciting fishing, though by no means specimen hunting.

Boat fishing the lochs
This, previously our daily fishing when up north, played a much smaller role in our adventures. This was partly because, on the main loch we chose to book boats, Loch Craggie, the fishing was not up to the standard of  previous years. Loch Beannach, which Jon and I had fished only once before, proved to be a much better bet and and more enjoyable day out for four of us.


Loch fishing from the bank

Access to the banks of Lochs Merkland and Loch  Ghriama were available free from the estate from whom we rented the house. Additionally numerous hill lochs could be reached by a mixture of off-road driving and walking into the hills. I only went to one, Loch na Stoine Luime, which was a tolerable walk, though over quite difficult ground in places. From these waters we took scores and scores of fish over the week I was there; all truly wild and those we kept were really delicious.


Fishing the river
This, from my point of view at least, proved to be the highlight of the stay. Again this was fishing that came with the house. There were wild brown trout from an ounce or two up to a pound and a few a bit more than that. On at least two days I estimate that I caught more than fifty fish, frankly I lost count. The other three all caught at least as many as me and probably more.

Laying a ghost
Given that last year I had become quite unwell and ended my trip in the NHS Highland Air Ambulance on the way to Raigmore Hospital in Inverness, I was able to return, enjoy myself immensely, drink a bit (not too much) eat fabulous food thanks to Jon's and Kev's efforts in the kitchen, and fish as intensively as I have done for many years.