Another winter day on Burrator (though not so calm)

I had never fished Burrator in the winter until two trips this week. The first of these was  with Peter on Wednesday. It was a cold but fairly sunny day and both Peter and I fished the Northern bank of Longstone. I fished in a similar fashion to that described by Tony in his post, using a black and green fritz booby. This produced a number of takes fished very slowly on a short leader and sinking line. I eventually banked two fish of about a pound and a half each. I was a bit surprised to see a good many fish rising and fished with dry flies for a bit but this didn't produce anything. I think Peter blanked.
My second trip was on Sunday and the weather was both colder and windier than earlier in the week. I  started off with a booby on a sinking line which did not produce any results at all. Changing to an intermediate line and a black and orange hot spot lure on the point with a small nomad on the dropper I fished on until lunch with only a couple of pulls and very cold hands to show for my efforts. A little after one I think the fishing gods threw the fish feeding switch to the on position because within a hour I caught my limit of three fish and lost another three. This was really good sport and a bit of reward for the effort I put in earlier in the day. One fish was a decent size as can be seen in the picture below. 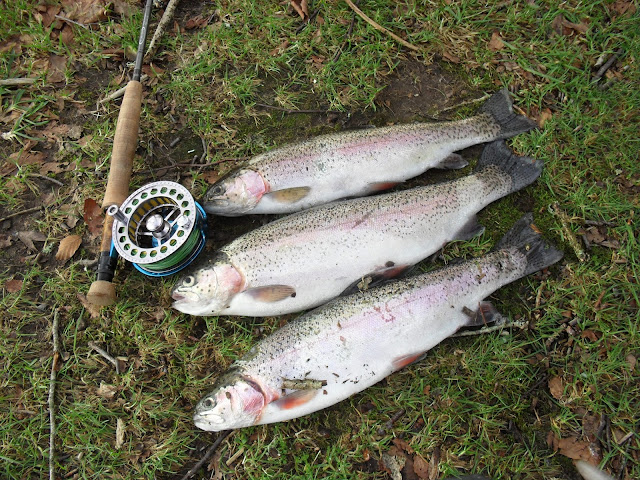